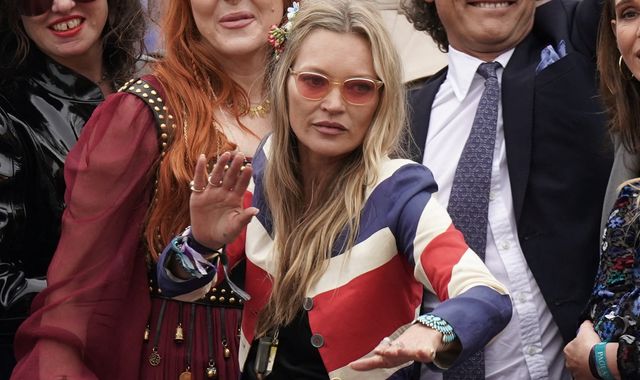 Supermodels Kate Moss and Naomi Campbell led the 1990s bus party for the Queen during the Platinum Jubilee Pageant celebrations.

The fashion icons were among hundreds of "national treasures" who joined the Times Of Our Lives section of the event in central London, which saw celebrities who have been pivotal to British culture paying homage to the monarch’s reign.

From Sir Cliff Richard representing the 1950s to TV presenter Holly Willoughby flying the flag for the 2010s – as well as Joan Collins and Twiggy appearing in the "Dames" section of the parade – all seven decades of Her Majesty’s historic sovereignty were covered.

Travelling through the street parade in decorated open-top double-decker buses themed to each decade, the stars celebrated as members of the public cheered them on.

The 1990s bus – which was designed in a denim style and featured images of figures such as the Spice Girls, David Beckham playing for England and even Gladiators – saw Moss donning a Union Jack jacket for the occasion.

Her appearance in London came following her surprise testimony in the Johnny Depp libel trial in the US.

The model was accompanied by other famous ’90s faces, including Patsy Kensit, Erin O’Connor and Campbell – who said she was "honoured" to be a part of the event and praised the Queen for "giving herself selflessly to this nation and the world and the Commonwealth".

Sir Cliff and Katherine Jenkins, representing the 1950s, were among the first stars to grace the pageant, while Basil Brush, Kate Garraway and Alan Titchmarsh, who was dressed in Union Jack colours, were part of a 1960s bus decorated in psychedelic patterns and flowers.

Read more: What was it like on a celebrity Times Of Our Lives bus?

A procession of thousands of members of the public accompanied the celebrities, also dressed in outfits representing the fashion and culture of the seven decades.

Platinum Jubilee: Hugs, air kisses and selfies on board a celebrity bus