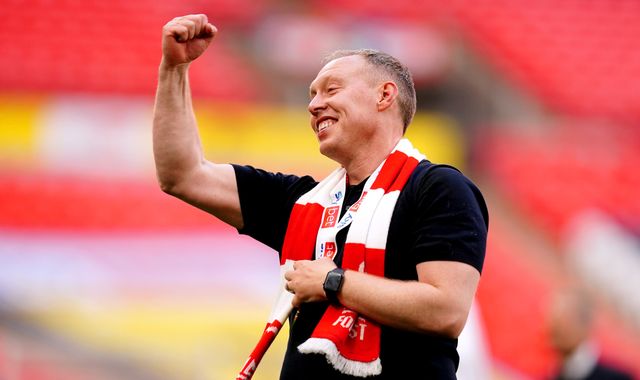 Steve Cooper spoke of his pride at leading Nottingham Forest back to the Premier League while Michael Hefele said Huddersfield were "robbed" by VAR in the final.

Levi Colwill’s own goal sent Forest into the Premier League for the first time in 23 years in a 1-0 Championship play-off final win over Huddersfield at Wembley.

Forest were bottom of the table and winless when Cooper took charge in September – now they have won football’s most lucrative match and are heading to the top tier.

Cooper told Sky Sports: "I’m really pleased for the players and the supporters. I think we played well in the first half. And of all the good goals we’ve scored this season, we get one like that – but it doesn’t matter. And we managed to see it through. Everyone connected to this football club deserves this today. We’re looking forward to a positive future.

"It’s relief of course but it’s pride. I love being at this football club. It’s changed my life. My family are here, the players’ families are here – this football club is about belonging to a city. It comes together on matchday. We’ve taken over Wembley today and are in the Premier League.

"This football club is built on positive eras from the past and we want to build on that. We are proud of that but at the same time we need to think ‘what if?’ Can we get the Premier League? Can we play attractive football? What if we can develop young players? And that’s what we’ve done showing an attitude and a commitment to not get beat. We deserve this.

"It’s a glamorous world being a footballer and a manager but it’s also a a harsh and spiteful one. And I just wanted the players to know I will be their biggest supporter and give them everything through thick and thin. It doesn’t mean I’m soft with them or don’t demand of them but everybody loves to be loved. That’s what we’ve tried to do with the players."

Carlos Corberan’s Huddersfield may feel they should have been given a penalty on two occasions in the closing stages of the second half.

In the first event, Harry Toffolo was booked for diving after he seemed to be clipped by Jack Colback. VAR agreed with the on-field call.

The second came as Lewis O’Brien was felled by Max Lowe in the penalty area. Again, though, referee Jon Moss was not interested and VAR did not review the incident.

He said: "Shocking. Huddersfield were robbed. The VAR is here. If you don’t give the penalty for the first one then you have to give this one as you know you made a mistake for the first one.

"If the ref can’t see it, and his team can’t see it, which is poor, then, obviously, we have got VAR for such a big game and they have to see it. It is unacceptable that they don’t give a penalty, because it is a clear touch. I’m not being a bad loser whatsoever, but this is a clear penalty and how on Earth the guys from the VAR can’t see this is shocking."

Fellow Sky Sports pundit Jobi McAnuff was in agreement that VAR should have helped the referee more. He said: "There is contact [on O’Brien] but it’s how that contact is initiated. That is a tough call. Much tougher than the first one which I would’ve given. But again, there was no check or time for the referee to have a look. If you’ve got VAR, go and use it. We’ve got it here for this specific purpose. Look at how much is at stake. Just go and look at the monitor then make your decision. I think we can then all live with that decision a bit better."