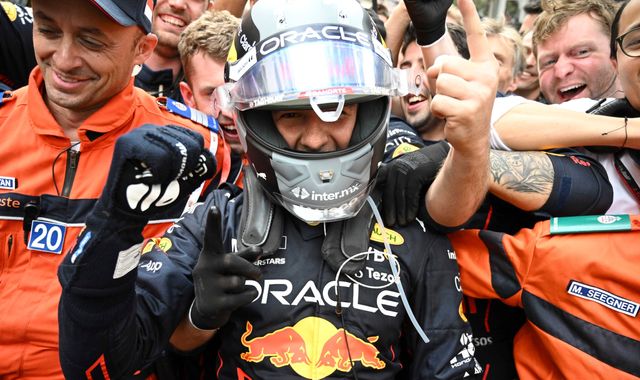 Sergio Perez claimed an unlikely victory in an incredible Monaco Grand Prix, with home favourite Charles Leclerc only fourth as Red Bull outsmarted Ferrari after heavy rain led to chaos in the Principality.

The race was delayed by over an hour after the heavens opened shortly before the expected start time of 2pm but F1’s blue-riband event was well worth the wait after that, with drama from the wet rolling start to a spectacular dry finish as Perez, on wearing tyres, held off Carlos Sainz.

Perez assumed control for his first Monaco win after Red Bull’s Monte Carlo street smarts wrongfooted the bewildered Ferrari, with the Mexican undercutting the pole-sitting Leclerc when changing from wets to intermediates early on.

There was then more agony for Leclerc when Ferrari double stacked Sainz, who hadn’t stopped at all, and the Monegasque onto slicks. Ferrari initially told Leclerc to pit before telling him, too late, to "stay out".

After Red Bull responded, Sainz was second behind Perez, and Leclerc a furious fourth behind Max Verstappen.

That was where the top four, who were all evenly matched, would finish despite a bumper finish after a red flag following a scary Mick Schumacher crash – which the German thankfully emerged unharmed from as his Haas car split in two.

There was another rolling start, confusing given the drying conditions, but Perez held on from Sainz until the end of the final 65th lap, with the race concluding 12 laps earlier than scheduled due to the lengthy delay.

Sainz, desperate for his first win and eager to take advantage of a bold wet-slick tyre strategy, eyed a few lunges on Perez, but the Red Bull driver has his first victory of the season.

Verstappen, meanwhile, has extended his lead in the championship to nine points over Leclerc.

"No words, no words. We cannot do that," said Leclerc on team radio after more heartbreak in Monaco.

There was then controversy well into the night in Monaco, as stewards cleared Perez and Verstappen after protests by Ferrari for alleged pit exit infringements.

George Russell was a well-earned fifth for Mercedes with Lewis Hamilton eighth, the seven-time world champion first frustrated behind the Alpine of Esteban Ocon – who earned a penalty for contact with Hamilton in the wet weather – and then of Fernando Alonso in the closing stages.

How the Monaco mayhem unfolded

– Rain started falling around 20 minutes before lights out in Monaco. The race start procedure was delayed, presumably to give teams time to prepare for a wet race, before Race Control indicated the formation lap would start behind the Safety Car at 2.15pm.

– The Safety Car led them away at that time but conditions worsened and with visibility and grip poor, the race was red flagged after two formation laps.

– Drivers were finally led out of the pit-lane by the Safety Car again at 3.05pm, although on that first lap both Nicholas Latifi and Lance Stroll nudged into the barriers.

– Pole-sitter Leclerc led the field away after the rolling start and built an early advantage, as all the top 10 held position before Sebastian Vettel boxed for intermediate tyres

– Perez was the first of the top four onto inters and immediately showed terrific pace, with Ferrari seemingly hoping to run Leclerc and Sainz from wets to inters

– Leclerc then pitted but the damage was done and Perez was ahead, while Verstappen wasn’t far behind either

– Ferrari then pitted Sainz, who did stay out on wets, and called in Leclerc too, before then telling the home favourite to stay out, but too late. It was a double stack but Leclerc was forced to wait for Sainz’s stop to complete, costing more time.

– Red Bull responded immediately with their own double stack for Perez and Verstappen; Perez was now leading ahead of Sainz, with Verstappen third ahead of the furious Leclerc

– Schumacher had a huge crash at the swimming pool chicane on Lap 27, with his Haas splitting in two. A Safety Car was deployed, before the race was red-flagged on Lap 30

– There was another delay before the Safety Car led drivers out of the pits again at 4.15pm. The three-hour window meant the race had to finish at 5pm, making it a timed race rather than a 77-lap one

– Perez built a gap after another rolling start but with Red Bull on medium tyres and Ferrari on hards, the Mexican’s tyres started degrading to give Sainz a chance

– But Perez held on for his first win of the season, and his first in Monaco.

Leclerc slammed Ferrari’s strategy mistakes after plummeting from first to fourth, with the home favourite admitting his latest crushing setback "hurts a lot".

The driver was furious on team radio, shouting: "****! ****! Why? Why? What are you doing?!" And after missing out on even a podium in Monaco, he said after the race: "The season is long, but we cannot do that."

Speaking to Sky Sports F1 afterwards, Leclerc said he was not "let down" but criticised his team for the "wrong" calls.

"Sometimes mistakes can happen but there has been too many mistakes today overall," stressed Leclerc.

"Obviously in those conditions, you rely a little bit on what the team can see because you don’t see what the others are doing with intermediates, with dry tyres.

"I have been asked questions about whether I wanted to go from the intermediates to the slicks and I said yes but not now, it will be a bit later on in the race.

"But I don’t understand what made us change our mind and go on these intermediates, I got undercut and then got stuck behind Carlos.

"There has been a lot of mistakes and we can’t afford to do that."

It isn’t the first time Leclerc has been left heartbroken at his home race. While 2022 was actually the first time he finished it, that wasn’t any solace.

"It is hard, as it has been the other years here so I am getting used to getting back home disappointed but we cannot do that, especially in the moment we are in now," added Leclerc.

"We are extremely strong, our pace is strong, we need to take those opportunities and we cannot lose so many points like this.

"It is not even from first to second it is first to fourth because after the first mistake we have done another one.

"I love my team and I am sure I will come back stronger but it hurts a lot," Leclerc continued.

"I think the first one was a very clear decision and a very wrong one and from that moment on the mess started.

"I don’t know if it is panic, I obviously don’t hear all the background radio that there is in the team but yeah, this is not up to me to judge.

"Obviously, the message that I had wasn’t clear, the last wasn’t clear because I was told to come in but then to stay out but I was already in the pit lane and that is where I basically let it all out on the radio and screamed because I knew I just couldn’t do anything and I was done."

When’s the next F1 race?

An epic Formula 1 2022 season continues with the Azerbaijan GP from the high-speed Baku street circuit on June 10-12. All the action will be live on Sky Sports F1 and the race – which often delivers chaos – is at 12pm on the Sunday.