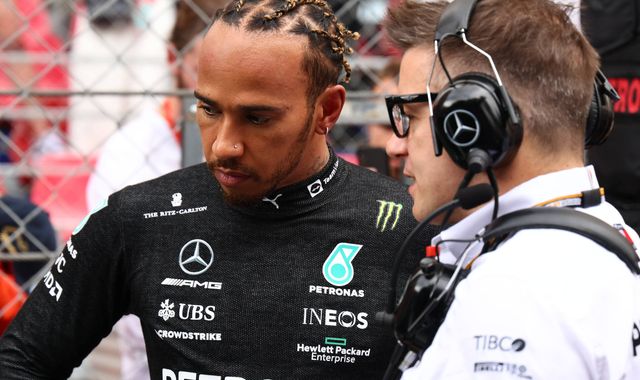 Mercedes boss Toto Wolff has defended Lewis Hamilton after another frustrating day in 2022, condemning Fernando Alonso’s hold-up in the Monaco GP while also insisting the seven-time champion and George Russell are "very much on the same pace".

Hamilton finished only eighth in Sunday’s frenetic wet-dry Monte Carlo affair, which is also where he qualified, as F1’s most successful driver finished behind young team-mate George Russell for the sixth race in a row.

Hamilton was first frustrated by the Alpine of Esteban Ocon, who earned a penalty for contact with the Mercedes, and then of Alonso, who then slowly held Hamilton up around the narrow streets.

"He could have been right there and could have closed Lando [Norris, sixth] or even fight with George [fifth] and Lando at the front because that was his pace," Wolff said afterwards.

Hamilton has bemoaned bad luck so far in 2022, with Safety Cars costing him many points while his Monaco GP weekend was hampered by a red flag in qualifying and then the Alpines in the race.

"When you look at the bad spells Lewis had, stuck behind Fernando today, the contact with Esteban, the red flag in qualifying yesterday," added Wolff.

"I think the pendulum will swing and this unlucky situation will stop with Lewis as they are very much on the same pace."

Hamilton is currently sixth in the drivers’ standings, 75 points behind leader Max Verstappen. Late on Sunday night, he posted a message to fans on his Instagram stories as he stated: "I’m sorry I haven’t given you any great results this year but I won’t give up, we win and lose together."

Hamilton restarted the race after the red flag behind Alonso and could not clear the Alpine, who was purposefully driving slow with overtaking difficult in the Principality.

Alonso was over four seconds a lap slower than the cars ahead, finishing 34 seconds behind Lando Norris despite the McLaren’s extra pit-stop.

Wolff accused Alonso of "Formula 2" driving and said Monaco may have to change.

"I think what we need to look at is Monaco," said the Mercedes boss.

"If a car can slow down by almost five seconds and hold everybody up it is just a shame for the racing here so maybe we can look at the track layout and the things we can do so we are not having a procession or having a strategy game or qualifying race.

"You can see there is another lesson that track position is everything in Monaco, I mean five seconds is like a Formula 2 car.

"It is such a spectacle here, it is such a fantastic venue and it is always amazing to be here but I think we need to look in a way at the layout where we can basically close the loop for five seconds slower and you still can’t do it."

Hamilton said he was frustrated but stated: "What is the good in letting it eat me away? It is what it is and there is nothing I can do about it.

"I will be back again at the factory and we will try again next race."

Hamilton: I am ‘done’ with the shaking!

Mercedes, after an encouraging Spanish GP, were well off the pace of frontrunners Red Bull and Ferrari in Monaco and their W13 was again suffering with bouncing, albeit thought to be due to the bumpy track rather than the porpoising of their floor.

The season continues with the Azerbaijan GP on June 12.

"I am praying that the car doesn’t feel like it does here because here it has felt the worst it has so far with the bumps," said Hamilton.

"My teeth and my jaw going the whole time, I am done with the shaking.

"Ours is so stiff that the suspension is driving it back into the ground.

"I am looking forward to some more open track and I am praying that it is not as bumpy as here."

"At the moment, I don’t want anything for us gifted," he added.

"Our team is only third on the road and that is why the positions of fifth and sixth are where we belong to.

"This is not where we want to be and that is why, if you are inheriting a podium it is nice, it is good for the points long term but I don’t want any of that.

"I want to be winning at the front and this is going to be part of important lessons we learn here and it is going to be the basis of us performing long-term again."