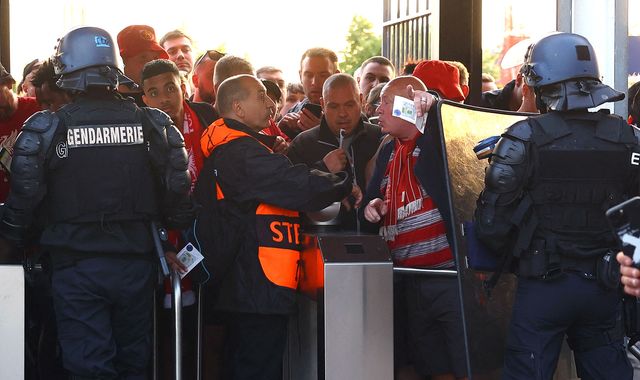 Amid claim and counter-claim, what actually happened at the Stade de France on Saturday night?

UEFA and the French authorities appeared to blame Liverpool supporters for the Champions League final kicking off late.

In an attempt to understand what occurred on the ground, Sky News has geolocated several videos posted on social media, showing fans being funnelled, scaling fences and being targeted with pepper spray.

Rob Draper, chief football writer at the Mail on Sunday, tweeted footage of fans close to an underpass near the Paris stadium, describing it as the “pressure point which caused the majority of problems” and the “crucial bit of evidence”.

His video shows a police van parked beneath the underpass, apparently blocking access to most of it.

Draper explained: “Police had for some reason parked 3/4 vans across the paths, making a broad walkway suddenly narrow, causing a bottleneck. I shot this at 7.22pm after about 10mins of waiting.”

To add context, Sky Sports News’ chief reporter, Kaveh Solhekol, filmed a report from the other side of the underpass.

It was “where all the problems this evening started”, he explained.

Pointing to a gap, probably only a few feet wide, beside one of the police vans, he said: “That gap is where 20,000 Liverpool supporters were funnelled through – that was the first security check for them to get anywhere near the Stade de France.

“We had a massive bottleneck there – 20,000 Liverpool supporters waiting there for two, three, four hours.

Once on the concourse outside the stadium, Liverpool fans were told to use turnstiles Y and Z, Solhekol said, and kept there for another two to three hours.

Some young French men – not necessarily football supporters – “surged in”, Solhekol said, and tried to get into the ground.

In the video below, fans are shown climbing a barrier close to the stadium, though they do not breach the ground itself.

Were you at the Stade de France? Contact us:

The following video, which includes a child, shows Liverpool fans reacting in dismay – the audio has been removed because of swearing.

As Liverpool fans can be heard singing You’ll Never Walk Alone, those still outside shout for someone to “open the gates”.

Some agile fans managed to scale the barriers close to the stadium, dropping nimbly to the ground on the other side and running towards the stairs leading to the stands, pursued by security. The voice on the video is Spanish, the fans are not dressed in Liverpool’s red, and it’s a different part of the stadium.

Another fan breaks through, ducks under a cordon and weaves through security on his way to the stadium.

In a fan park in the French capital, fans, including a man with a walking stick, are sprayed with tear gas after the match has ended.

The tear gas appears to swirl through the air.

Sol Simpson, who recorded the footage, told Sky News the fan zone was “practically like a cage with all the fans just trapped inside, hence why it was just so easy for them to fire the tear gas inside from the sides of the venue”.

He added: “There was such a large force of riot police van vehicles around the fan zone – also including buses and about 70 plus motor bikes with police officers doubled up on them.

“I actually lost all my friends in this moment as everyone just ran in different directions in pure fear to what’s going on.