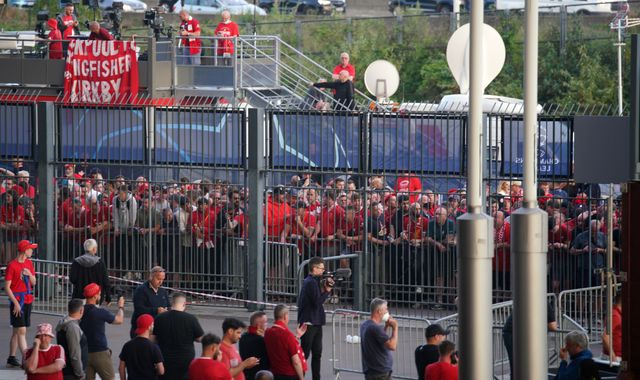 The French interior minister has blamed “fraud on an industrial scale” for chaos at the Champions League final in Paris – but expressed “regret” for “disorganisation” at the event.

Gerald Darmanin said thousands of fake tickets had caused the mayhem that ensued as Liverpool fans attempted to enter the stadium on Saturday evening.

“I would like to express our regrets with regard to the organisation of this final, because some people were not able to see the whole of the match,” he told a news conference.

“And, of course, I deplore also the errors that took place before this football match.

“We regret that there was disorganisation with regard to welcoming the British supporters as opposed to the Spanish supporters.”

He said 30,000 to 40,000 English supporters had gone to the stadium, a figure he said had been confirmed by UEFA and the police, and “found themselves at the Stade de France without tickets or with fake tickets”.

“It was noted there was massive fraud on an industrial scale and organisation for fake tickets because the pre-filtering by the Stade de France and the French Football Federation saw that 70% of tickets were fake tickets coming into the stadium,” he said.

Mr Darmanin said that half of the 29 or 30 arrests inside the stadium had been of British citizens.

But he added that while French authorities had taken steps to prepare for the risk of English hooliganism at the final, they were caught off-guard by “local delinquents” who also turned up to cause trouble.

Earlier in the day, the French sports minister had blamed Liverpool fans who turned up without valid tickets.

Amelie Oudea-Castera said: “What happened, first of all, was this mass gathering of the British supporters of the Liverpool club, without tickets, or with fake tickets.”

She spoke before a meeting with UEFA and other officials to discuss violent scenes that have prompted criticism of the Paris police.

They repeatedly fired tear gas and pepper spray at Liverpool fans waiting to get into the stadium in Paris on Saturday for a game their team lost 1-0 to Real Madrid.

Ms Oudea-Castera said the meeting – which included police, stadium officials and the French Football Association – had been arranged in an effort to “draw lessons” from the event.

The UK has demanded a full investigation into what happened, and Boris Johnson’s spokesman described the scenes as “deeply upsetting and concerning”.

Ian Byrne, the Labour MP for Liverpool West Derby, was at the match in Paris and said he had never witnessed such scenes since the 1989 Hillsborough disaster that left 97 Liverpool fans dead after a crush developed at Sheffield’s Hillsborough stadium.

“I think we’ve got to make sure that the scenes that we experienced on Saturday are never ever replicated again at any sporting occasion,” he added.

UEFA said “thousands of fans” had tried to get in using fake tickets, which would not work on turnstiles.

The Paris police prefecture said they then “employed strong force” to try to enter the venue, prompting others to do the same.

‘One of the most horrendous experiences of my life’

Mr Byrne has written to Foreign Secretary Liz Truss, urging her to demand a formal investigation and apologies from UEFA and French authorities.

In his letter, he said: “The French authorities and UEFA are quite simply covering their own backs with this narrative.

“As a Liverpool fan, I was in Paris for the match and I can honestly say that the situation outside the ground was one of the most horrendous experiences of my life – and as a Hillsborough survivor, I do not make this comment lightly.”

He called for an end to the treatment of football fans as “second-class citizens” and “animals”.

Merseyside Police observers said the majority of supporters waiting outside the security perimeter had behaved in an “exemplary” manner, which did not justify the use of tear gas.