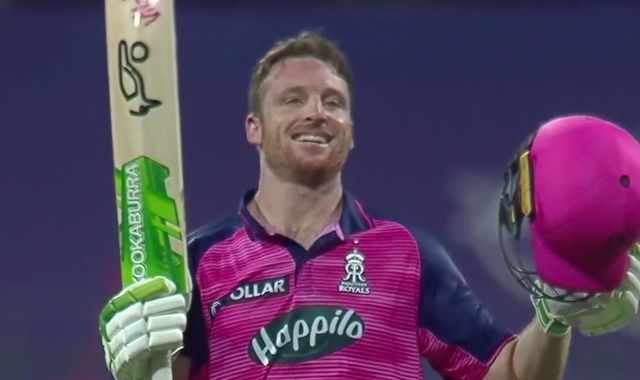 "I can’t remember anyone batting this well in the history of the IPL."

Kumar Sangakkara was speaking about Jos Buttler after the Rajasthan Royals opener took his tally of runs for the season to 824 with a record-equalling fourth ton in a single campaign.

Buttler’s 106 not out from 60 deliveries against Royal Challengers Bangalore on Friday, which propelled his team to victory and into Sunday’s final, means he has matched RCB linchpin Virat Kohli’s four centuries in a season, set back in 2016.

The Englishman has the chance to take the record outright when Royals face Gujarat Titans in the title game, live on Sky Sports Cricket from 2.50pm on Sunday.

Kohli’s record of 973 runs in a solitary IPL campaign looks safe due to Buttler’s mid-season blip, during which time he said he "felt a bit of pressure" and had to have "honest conversations" with his side’s coaching staff, including director of cricket Sangakkara.

The 31-year-old mustered a top score of 30 across five innings prior to hitting 89 in Royals’ first play-off game against Gujarat and then that ton in their second against RCB.

Buttler needs an unlikely 150 runs in Ahmedabad on Sunday to leapfrog Kohl’s tally but you would not back against him getting a fair portion of that number.

Sangakkara added of his red-hot batter: "It’s hard to describe what he has done for us this season. It’s just his overall game.

"He’s got some pretty potent strengths, and once he recognises that and trusts those strengths, he manoeuvres the rest of the bowling to go more and more into his strengths.

Buttler has passed fifty eight times in 16 innings so far this season, with his centuries coming against RCB, Kolkata Knight Riders, Delhi Capitals and Mumbai Indians.

He is scoring at a strike rate of 151.47 and has crunched a leading 45 sixes. Not bad for a player who came into the campaign with "pretty low expectations".

"It’s certainly up there," said Buttler when asked by Sky Sports News if he was in the best form of his career.

"I think having a really good break before the IPL was incredibly valuable. I had two months of no cricket, not picking up a bat.

"I had pretty low expectations in terms of cricket but had great energy and motivation and once I scored some runs, the confidence in my game was there."

The late, great Shane Warne – captain and coach when Rajasthan claimed their first and so far only IPL crown at the inaugural event in 2008 – would have loved watching the team and Buttler’s success this season.

It would be a rather fitting tribute if Royals could win the title this weekend following Warne’s passing at the age of 52 earlier this year.

Buttler said of Warne, who had been around the camp as team mentor in recent seasons: "He was obviously such an influential figure with the team, having led them to success. He holds an incredible legacy with the Royals.

"We all miss him dearly but we know he has been there in spirit for us and I’m sure he’s looking down at us with a lot of pride. Hopefully we can do him proud.

"I don’t think we will need too much extra gee up to go and play an IPL final but to know he was the man to win the first IPL trophy gives us great inspiration.

"We hope to play in his spirit and the way he would want us to play."

It has taken Rajasthan 14 years to get back to the IPL final – but Gujarat have done it in one after a successful debut season.

Titans topped the group phase with 10 wins out of 14 and then defeated Royals in the opening play-off contest to secure immediate progression to the title game.

On the bowling front, Mohammed Shami (19 wickets) and Rashid Khan (18) have a combined 37 scalps.

One of Miller’s fifties came against Rajasthan last week as he clinched victory for his side with three consecutive sixes in the last over, meaning Gujarat have won both of their meetings with Rajasthan so far this term.

Past meetings favour Gujrat, then, but with Warne looking down and Buttler back on the up, perhaps this will be Rajasthan’s time.

Watch the IPL Final between Rajasthan Royals and Gujarat Titans, live on Sky Sports Cricket from 2.50pm on Sunday.