Champions League final chaos: Liverpool player says club-issued ticket he gave to a friend was dismissed at ground as fake 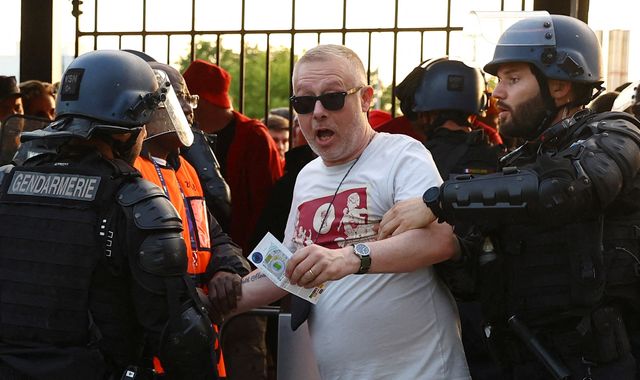 A Liverpool player says a club-issued ticket to the Champions League final was dismissed as “fake” – as UEFA and French ministers blamed fans at the UK end for the delayed kick-off against Real Madrid.

Liverpool FC has called for an investigation after its followers were subjected to violence in Paris, with tear gas being used repeatedly.

Cabinet minister Brandon Lewis told Sky News it appeared that an “aggressive approach” had been used against Liverpool fans and it was “concerning”.

The size of the crowd appeared to overwhelm security at the Stade de France. Many supporters waited outside for hours, while others were not allowed in until half-time.

Liverpool wing-back Andy Robertson revealed a friend had been accused of holding a counterfeit ticket.

“Obviously my tickets were through the club and somehow somebody told one of my mates that he’s got a fake ticket which I can assure you it definitely wasn’t because it was obviously through me,” he told Sky Sports News.

“Then obviously the French police decide to throw tear gas on fans and families.

“It’s the biggest game in world football – it should be organised a lot better.”

Liverpool legend Sir Kenny Dalglish told Sky News the “fans are totally exonerated if you read all the press reports”, adding: “I think the French authorities should be a bit embarrassed by the way they behaved.”

Separately, French police said they made 68 arrests at fan zones.

French interior minister Gerald Darmanin said the blame lay with those who had travelled from the UK.

After visiting security HQ at the stadium, he tweeted: “Thousands of British ‘fans’, without tickets or with fake tickets forced their way in and, sometimes, violated the stewards.”

French sports minister Amelie Oudea-Castera said “attempts at intrusion and fraud by thousands of English supporters complicated the work of the stadium staff and police”.

UEFA, European football’s governing body, also appeared to blame British supporters, saying: “In the lead-up to the game, the turnstiles at the Liverpool end became blocked by thousands of fans who had purchased fake tickets which did not work in the turnstiles.”

But Merseyside police said the “behaviour of the fans at the turnstiles was exemplary in shocking circumstances”.

Mr Lewis, who is Northern Ireland Secretary, said: “It is not the first time we have seen this overseas, actually. We’ve got to learn a little bit about what happened over there, get to the bottom of it.”

While French officers with batons and riot shields ran from gate to gate to try to prevent groups of fans forcing their way into the stadium without showing tickets, Liverpool supporters said the tensions had been driven by young Parisians, who taunted police and caused the gates to be shut.

A fan returning to Liverpool John Lennon Airport on Sunday morning, Daniel Miller, told Sky News it was “absolute carnage” and the fans were “treated like cattle”.

He added: “The police treated us terribly. It was brutal, to say the least. The fans were treated like cattle, basically – they were trying to get everyone in, around 20,000 fans into a small space.

“Never had any problems in Madrid, Kyiv, Istanbul, but Paris, I can honestly say I would never go back there for a football game.”

Another fan, Peter Moore, said it was “chaos, absolute chaos”.

“It was dangerous,” he added. “As you approached there were literally thousands of gangs of local French kids that were clearly there to get themselves into the stadium and steal tickets off people, pickpocket people, and it was very, very intimidating.”

Liverpool FC said in a statement: “We are hugely disappointed at the stadium entry issues and breakdown of the security perimeter that Liverpool fans faced this evening at Stade de France.

“This is the greatest match in European football and supporters should not have to experience the scenes we have witnessed tonight.

“We have officially requested a formal investigation into the causes of these unacceptable issues.”

A Merseyside Police spokesperson said on Twitter: “MERPOL was deployed to this evening’s match.

“Can only describe it as the worst European match I’ve ever worked or experienced.

“I thought the behaviour of the fans at the turnstiles was exemplary in shocking circumstances.

Sky correspondent James Matthews was at the game and said: “It was Liverpool’s biggest night of the season but, whatever happened on the pitch, it was a shambles off it.

“The kick-off may have been delayed but, even as it approached half-time, several hundred Liverpool fans were still queuing to get in.

“Many of them showed us their tickets and told how they’d been waiting for more than two hours to gain entry. This, after a long and expensive journey to get here.

“Big football occasions attract large numbers of ticketless opportunists and there was clearly a police effort to weed them out.

“It meant that large groups of supporters were caught up in a robust policing operation that saw groups of officers in riot gear conducting chases around the stadium concourse and using irritant spray and tear gas.

“Liverpool fans were caught up in the chaos and had to endure the irritant – the choice was to run or lose a place in the queue.

“All this on European club football’s biggest occasion – a night which was, for too many, the showpiece that showed football at its worst.”