Champions League Final: Liverpool boss ‘Jurgen Klopp slapped me in the face… I love him’ 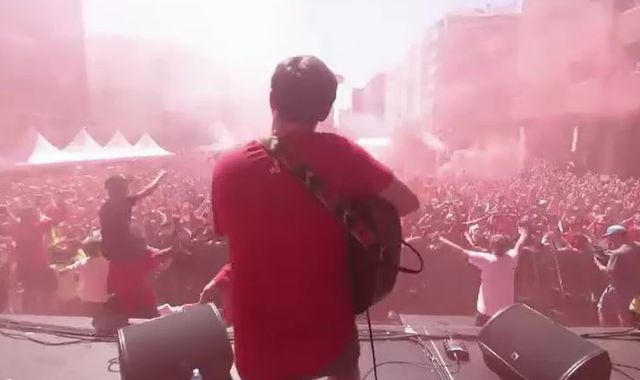 There was a point mid-afternoon three years ago when Jamie Webster lost the ability to speak.

With his guitar in hand, the one-time electrician had just taken 60,000 fellow Liverpool fans through his set of football anthems in a fan park in Madrid.

The euphoria that pulsated through the crowd overwhelmed him.

“I scared myself when I have seen the footage of it,” he told Sky News.

“It was just like this nervous energy coming out of me. I had sort of left my body.”

For him it was the moment when that evening’s Champions League final win over Tottenham seemed like it just had to happen.

“The energy and the emotion… being stood on that stage from all those people… it’s different to any concert,” Webster told us as we sat down in a bar in central Liverpool ahead of their next Champions League final.

“It’s like we were at war or something… it was tribal.”

In the aftermath of Liverpool’s victory over Spurs three years ago, Webster was invited to perform at the players’ party and Jurgen Klopp has subsequently admitted to him how much he cried watching back his performances and the fanbase in Madrid.

At another club event when Webster went over to thank Klopp for the success he has brought to Anfield, the manager turned the tables on him.

“He just sort of turned his back to everyone else… and he just slapped me in the face, and he was like ‘no, thank you lad’ and gave me a big hug,” Webster said.

“I love him… the fella owes us nothing.

“He has delivered the days that me and my dad and me brother and me family have had… the bonds that have been made over all of this – it is priceless.”

The 28-year-old will play alongside the Lightning Seeds on the Cours de Vincennes in Paris – one of the main roads in the French capital – which has been turned into Liverpool’s fan park ahead of this year’s final against Real Madrid.

“Paris, Liverpool and Real Madrid – the romance around it, the tale. It’s set, isn’t it?” said Webster.

“I don’t think it’s going to be one of those games where we try to cancel each other out like a no man’s land stalemate, I can’t see that.”

Webster believes that the Klopp era now rivals anything that previous generations of Liverpool fans have enjoyed.

“What he (Klopp) has done in the city, Liverpool fans found their voice again. They found their identity again that they thought was being lost,” he said.

“It is like he has given birth to Liverpool Football Club again.”

While the effects of Klopp’s success spread far and wide, it also just injects optimism into so many lives.

It’s something Webster has seen all around him.

“For that day on the bus, for that 90 minutes in the ground for that 60 minutes at the gig, when you are together with your mates and you just forget, you forget about the worries… it is like therapy,” he said.

Their last therapy appointment of the season awaits in Paris.