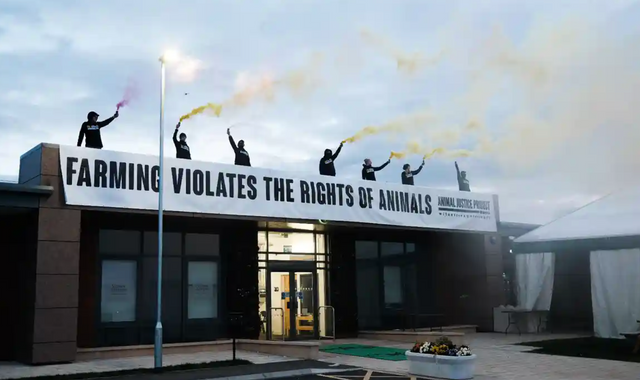 Animal rights activists have been “sprayed with manure” after being confronted by angry farmers during a protest at Britain’s largest beef industry event.

The incident took place outside Darlington Farmers Auction Mart (DFAM) in County Durham earlier today as demonstrations resulted in one protester being taken to hospital.

A spokesperson for the group said campaigners were left “covered in excrement” after one event attendee allegedly used a sprayer to blast manure at them.

They said another activist was injured after farmers allegedly ploughed towards a group of protesters in a JCB digger.

The AJP said its protest was “peaceful” and “silent” and aimed to highlight “farmed animal suffering and environmental safety concerns”.

But an AJP spokesperson added: “We’ve been sprayed with cow poo by one farmer using a machine.

“It has been a peaceful protest and a silent protest and we are overwhelmed and outnumbered by hundreds of angry farmers.

“It’s really violent and there was one farmer who went along and sprayed everyone’s clothes. Shouting, swearing, spraying us with manure, ripped the banners down. It’s absurd.”

The National Beef Association (NBA) described the event as a celebration of the best of British beef which attracts at least 5,000 guests every year.

The group said the farming event “glorifies the exploitation and killing of animals” which is “fundamentally wrong and unjust”.

Police have been on the scene since 5am working to bring the demonstration to an end, however activists said they intend to stay indefinitely.

Mark Dent, chair of DFAM, said earlier he believed the protesters were the source of “intimidation”.

He said: “We respect people’s right to protest, but the way they go about it doesn’t help their cause.

“There is no respect for people’s property or livelihood. I’m afraid then you lose your moral high ground… It’s a tin roof and they’re jumping up and down on it, and it’s bending.

“They’ve got their faces covered. It’s intimidation (and) threatening behaviour. I’m all for people protesting what they believe in, but it’s the way they go about it – the face coverings, the intimidation.”

He added: “If you have a pair of eyes you will see how important agriculture is around the world at the moment. Food is top of the agenda.”

A spokesperson for the NBA claimed there was a “wonderful atmosphere” at the event and did not comment further on the protest.

Durham Police said: “Our officers are working to bring the protest to a safe end and to minimise the impact on the wider community.”