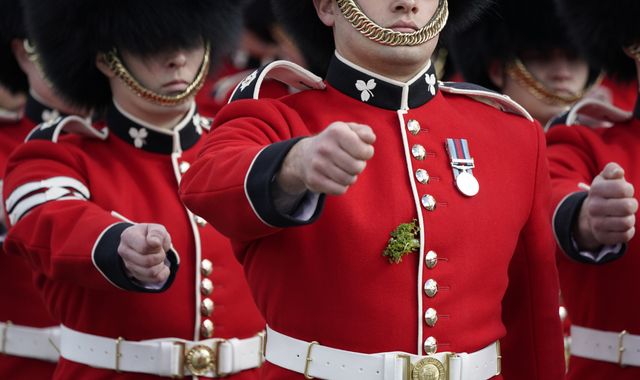 Six serving soldiers have been arrested on suspicion of conspiracy to supply drugs, and money lending and laundering offences.

The six members of the Irish Guards were arrested along with a Coldstream Guards veteran this week in an operation led by the Royal Military Police.

The regiment was to lead the Trooping of the Colour on Thursday 2 June, as part of the Queen’s Platinum Jubilee celebrations.

But the Ministry of Defence said the soldiers arrested would not be taking part.

An MoD spokesperson said: “As part of a planned operation the Royal Military Police arrested six Irish Guards soldiers and a Coldstream Guardsman veteran from across the UK on suspicion of conspiracy to supply drugs and money lending and laundering offences.

“None of the soldiers under investigation will participate in planned Queen’s Platinum Jubilee parades.

“The army does not tolerate any type of illegal or fraudulent behaviour.

“As this is now the subject of an independent Royal Military Police investigation, it is inappropriate to comment further.”

A source at Mons Barracks in Aldershot, where the 1st Battalion Irish Guards are based, told The Sun: “They came in like the DEA (US Drug Enforcement Administration) – kicking down doors.

“There was no warning. We were told they had been planning the operation for months.

“It wasn’t just the barracks. They searched the soldiers’ homes off base. It’s all come as a huge shock.”