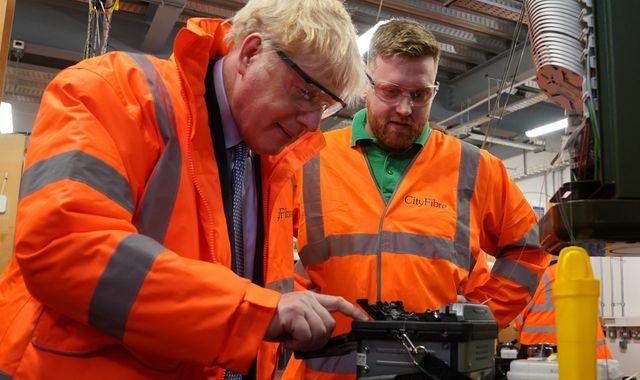 Boris Johnson has said a “big bazooka” of cost of living help will help struggling families get through bumpy times ahead.

The prime minister was speaking to reporters in Stockton, Teesside, a day after a £15bn package of new measures was unveiled by Chancellor Rishi Sunak.

All households will see £400 cut from their energy bills while the poorest eight million will receive lump sum payments of £650, beefing up support announced earlier in the year including a £150 discount of most council tax bills.

Mr Johnson described the assistance, amounting to £1,200 for the least well-off households, as a “big bazooka”.

He added: “I’m not going to pretend this is going to fix everything for everybody immediately. There are still going to be pressures.

“But it’s a very very substantial commitment by the government to getting us through what will be I’m afraid still a bumpy time with the increase in energy prices around the world.”

He said the measures will “get us through until I believe that prices will start to abate and we’ll be in a much stronger position”.

The measures will be part-funded by a tax levy on the bumper profits being enjoyed by oil and gas companies, which is expected to generate £5bn for the Treasury over the next year.

Shell responded by saying that the move “creates uncertainty about the investment climate for North Sea oil and gas for the coming years” while BP said it would need to look at the impact of the policy on its North Sea investment plans.

The cost of living help comes at a time when soaring energy prices have pushed inflation to a 40-year high of 9% and after regulator Ofgem warned that gas and electricity household costs looked set to go up by a further £800 in the autumn.

Mr Johnson followed his Chancellor Rishi Sunak – who spoke to Sky News earlier – in playing down the risk that the support package could stimulate further inflation.

“We’ve looked at that very carefully and I think the answer to that is no because I don’t think that it will lead necessarily to more discretionary spending simply because people’s outgoings are going to go up and have been going up already as as result of the increased costs of energy and food,” the PM said.

This week’s announcement comes after Labour pressing for months for cost of living help to be funded by a windfall tax.

The PM said the government’s plan was “more generous” and “massively, massively redistributive” – though it also comes with tax breaks to encourage those companies subjected to a windfall tax to invest.

But some Tories were dismayed by the announcement – such as backbench MP Richard Drax who accused the Chancellor of “throwing red meat to socialists”.

Meanwhile Mr Sunak has responded to the suggestion that those as wealthy as him would not need the universal £400 energy bill discount by saying he would give his to charity.

Asked if he would follow suit, Mr Johnson said: “I think my arrangements are different because I live in a government flat.”

Labour’s shadow chancellor Rachel Reeves told Sky News that if the government had not spent months resisting a windfall tax, it “could have taken the time to get this package right”.

“It is not right that if you own a second or a third home you should get this £400 payment multiple times,” she said.

“This is only happening because this package has been rushed through.”