Partygate: Met Police acted with ‘integrity’ over lockdown party inquiry and made decisions ‘based on facts’, says head of force 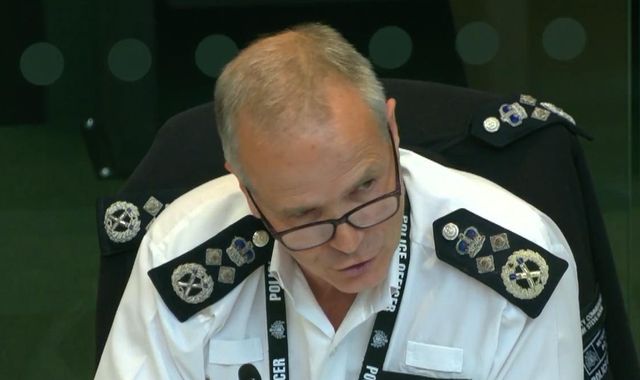 The Metropolitan Police acted with “integrity” during its partygate investigation and officers made decisions “based on the facts and were proper”, the force’s acting commissioner has said.

The investigation has come under criticism for only fining Boris Johnson once, especially after the Sue Gray inquiry, published on Wednesday, revealed many instances of partying in Downing Street while COVID restrictions were in place.

Challenged over why the prime minister did not receive a fine for attending a leaving party for his former communications director Lee Cain on 13 November 2020, during England’s second national lockdown, Sir Stephen said he was “confident of the integrity of the decisions” taken.

Photos of the gathering, with the PM toasting colleagues, emerged two days before Ms Gray’s full inquiry was published.

Read more: Details of how the Met Police investigated partygate

Sir Stephen said officers had “looked at hundreds of documents, including emails, electronic door logs – in other words, people in and out at various times – diary entries, witness statements, photographs, CCTV images, and we sent questionnaires to people who we felt may have breached legislation”.

“The explanations that were given in the questionnaire were all considered carefully,” he said.

The acting commissioner, who is in post until a replacement is found for ex-boss Dame Cressida Dick, said fines were only issued in cases where officers were confident a conviction could be secured if challenged in court – something the Met explained when it concluded the inquiry last week.

He said they considered several aspects:

• The nature of the gathering

• Different phases of the gathering

• Amount of time spent there by a participant.

Sir Stephen added that detectives “critically, cross-referenced the evidence to identify whether the individual, on a full consideration of all the facts that we had, including their own account, did or did not have a reasonable excuse for his or her participation in the gathering”.

“If the case were taken to court, in other words, if we issued a fixed penalty notice and it was refused and somebody said no, I want to go to court, then we had the evidence that we thought would give us a realistic prospect of a conviction,” he added.

“I believe that the decisions that my officers made were based on the facts and were proper.”

Sir Stephen has also written to London Mayor Sadiq Khan after he was asked to give “a more detailed and formal explanation” of how decisions were made.

The senior officer said in his letter that he understands the “strong interest, feelings and opinions in this case” and that the public would like more clarity.

“I would like to reassure you and the public that the Met has done its job to enforce the law carefully, thoroughly, proportionately, impartially, without fear or favour,” he said.

Sir Stephen added that the Met had a “general rule” of not investigating alleged lockdown breaches retrospectively but did so in Downing Street and Whitehall’s case because they felt:

• And there was little ambiguity around the absence of any reasonable defence.

In the letter to Mr Khan, Sir Stephen said it would not be “consistent with our policy and practice throughout the pandemic, or fair to the individuals concerned – at different levels of seniority” to go into details for each case as this would risk identifying them.

He added that he is aware the police watchdog has been asked to look into the Met’s investigation (by the Lib Dems) and they will “of course cooperate fully with any scrutiny they bring to this”.