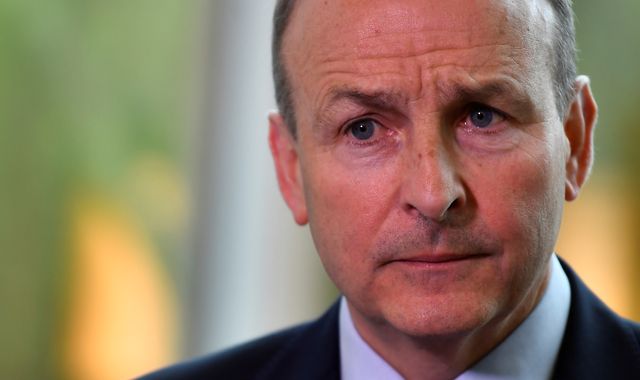 Mr Skripal, his daughter Yulia and police officer Nick Bailey were left critically ill by the attack but all three survived. Three months later a British woman Dawn Sturgess died after handling a discarded bottle believed to have contained Novichok.

The UK accused two named GRU agents of carrying out the attack and in response Theresa May’s government expelled 153 Russian diplomats and announced limited sanctions, including a diplomatic boycott of the Russian World Cup.

The attacks came 12 years after the assassination of Alexander Litvinenko in London using the radioactive agent polonium by Russian agents.

Discussing the European response to the invasion of Ukraine at the World Economic Forum in Davos, Mr Martin said both attacks were an example of European nations not responding robustly enough to the threat from Moscow.

“When you look back at Salisbury, or you look at polonium in London… I watched documentaries on the first recently and it struck me, that was a public health attack on citizens of Europe in the United Kingdom,” he said.

“It was terrible that they were directed to murder an individual, but there was a wider public health threat to many, many people, and a few diplomats were sent home and that was kind of it.

“In hindsight one can indulge too much, we can be complacent and hope that the better side of a country will emerge eventually. We cannot take that for granted any longer.”

Mr Martin was speaking alongside his counterparts from the Netherlands and Slovakia, both of whom called for a more united and robust response from the European Union to Russian aggression.

Eduard Heger, the Slovakian prime minister, told Sky News his country could not afford Ukraine, with which it shares a border, to lose. “If Ukraine fails we are next,” he said.

“If they fail, we know that Russia will go further. So this is really very vital. And we have to understand, especially in the European Union, because we are one body at the end of the day.

“We need to support Ukraine because if they fail, then it’s going to threaten us: Poland, Estonia, Lithuania, Latvia. So there’s several reasons why we need to help them. But the main is that they’re fighting for our values.”

“For too long the EU has been a playing field, not a player,” he said. “We need to step up our game. We are working hard to keep the coalition together on Ukraine, but we have to leverage the strength of the internal market.

“We have the strongest market in history and everyone wants to be more connected to it, so we need to ask what we want to get in return.

“We also need to have a stronger foreign policy response, and that means the biggest countries in the EU, Italy, France and Germany, may have to give up some sovereignty over their foreign policy. We will of course have individual foreign policy because we are sovereign nations, but that what we need if we are to leverage the collective power of the EU.”

Mr Martin was also critical of the UK’s approach to Brexit, saying it had made EU membership more popular in Ireland.

“The Brexit experience has actually developed a stronger pro-European position because people just looked at Brexit and said no we don’t want that in any shape or form because it has not been well planned or prepared, with the greeted respect to our good neighbours, that has not landed well with Irish public opinion.”