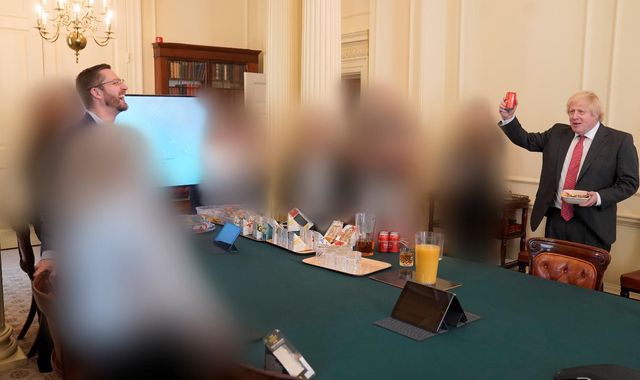 The senior leadership at Downing Street – both political and official – must “bear responsibility” for the culture of partying during COVID lockdowns, according to a report from senior civil servant Sue Gray.

The report added that “while there is no excuse for some of the behaviour set out here it is important to acknowledge that those in the most junior positions attended gatherings at which their seniors were present, or indeed organised”.

It also included pictures of some of the events detailed featuring the prime minister.

The PM told the House of Commons after the report was released that he “briefly attended” some of the gatherings but did not know at the time that they had gone on longer than necessary.

Ms Gray’s report sums up her findings on 16 events in 2020 and 2021, including that:
• A large number of people attended events and breached COVID guidelines
• Staff felt unable to raise concerns about behaviour
• Excessive alcohol consumption was reported, one person was sick and there was a fight
• Drunkenness was reported and staff were told to leave via the back door
• Senior leadership – political and official – must bear responsibility for the culture
• Those in most junior positions attended gatherings at which their seniors were present, or had organised
• “Multiple examples” of a lack of respect and poor treatment of security and cleaning staff

The report also voices disappointment that some events only became known to her because of reporting in the media – and notes that given this there may have been others that took place that were not investigated.

Among the events that were looked at by Ms Gray’s inquiry was a “socially distanced drinks” gathering in the Number 10 garden on 20 May 2020 held even though “some concerns were expressed about whether it was appropriate to hold the event”.

An email invitation was sent by Martin Reynolds to around 200 Downing Street staff by Boris Johnson’s principal private secretary telling people to “bring your own booze”.

The report found Lee Cain, the PM’s then-head of communications warned that the party would be a “comms risk”.

A special adviser warned Mr Reynolds that it would be “helpful” if people avoided “walking around with bottles of wine” ahead of the party as it was taking place after a press conference.

After the event, Mr Reynolds is found to have sent a message saying: “Best of luck – a complete non story but better than them focusing on our drinks (which we seem to have got away with).”

At another gathering on 18 June, Ms Gray found that an “excessive amount of alcohol” was consumed and that “one individual was sick” and there was a “minor altercation between two other individuals”.

A Christmas quiz event on 15 December 2020 featured some staff drinking alcohol – and a message on an internal Number 10 system referred to “drunkenness” while advising staff to leave via the back door “to avoid staff being photographed by the press outside”.

At a pre-Christmas event on 18 December involving the Downing Street press office – featuring a “secret Santa” gift event, a quiz and an award ceremony, a panic alarm button was accidentally triggered by a member of staff – which was responded to by police and security staff.

A cleaner noticed the next morning that red wine had been spilled on a wall and on boxes of photocopier paper.

On 16 April 2021, the eve of the Duke of Edinburgh’s funeral, when there were two separate leaving events in Number 10, with one featuring music played from a laptop on top of a printer, Ms Gray found that some people drank “excessively”.

The two groups ended up in the Downing Street garden, where more than 20 were gathered just before 9.30pm with a number of bottles of alcohol, the report said.

Some gathered “near a child’s swing/slide in the garden, damaging it by leaning on and playing with it”.

A number carried on drinking until the early hours with the last member of staff leaving at 4.20am.

The prime minister told the House of Commons that he was “appalled” by some of the behaviour – and truly believed when he issued an early update on the scandal that rules had been followed.

He said: “I am humbled and I have learnt a lesson.”

Mr Johnson said he had “briefly attended” some gatherings which went on after he left and that he had “no knowledge of those subsequent proceedings”.

But Labour leader Sir Keir Starmer said: “This report will stand as a monument to the hubris and arrogance of the government that believes it was one rule for them and another for everyone else.”

He told the PM it was “time to pack his bags” in order to “restore the dignity of this great office” and that the Tories had “set the bar for his conduct lower than a snake’s belly”.

Mr Johnson responded by accusing Sir Keir – who he dubbed “Sir Beer Korma” – of failing to hold himself to the same standards, referring to a police investigation into an event in Durham at which the Labour leader was present.

Sir Keir has said he will resign if he is fined as a result.

The PM did not deny the claim explicitly, simply saying it was “a wholly independent report”.

The highly-anticipated publication of the full report from Ms Gray comes after police last week said they had concluded their investigation into lockdown-breaking events at the heart of government, which resulted in 126 fines being issued for 83 people.

Mr Johnson has already apologised after receiving one fine for attending a gathering in Downing Street to mark his birthday in June 2020 – and questions have been raised about why he did not receive penalties relating to other occasions.

Opposition politicians – and some backbench Tory MPs – have already called for the PM to resign over the scandal.

An interim version of Ms Gray’s report was published earlier this year, which criticised “failures of leadership and judgment” in Downing Street and said some events should not have been allowed to take place.

But its contents were limited because the Met Police had asked for minimal reference to be made to some of the alleged gatherings, which were being investigated by detectives at the time.

Now that the police and Sue Gray inquiries have concluded, the PM faces a further probe by a Commons committee over claims he misled parliament.