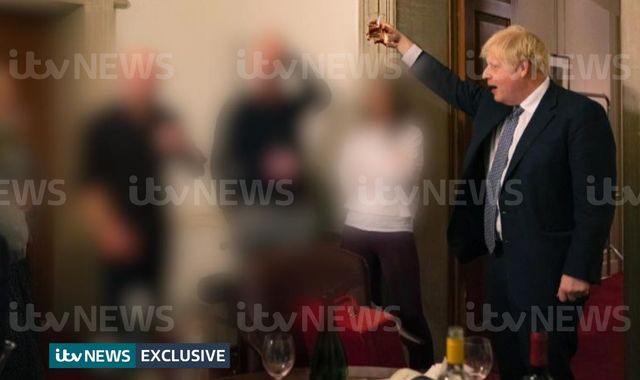 Sue Gray has provided her report into lockdown-busting parties in Downing Street to the prime minister, the Cabinet Office has confirmed.

Boris Johnson will make a statement on the report later, a Twitter feed for the leader of the House of Commons, Mark Spencer, said.

Officials in Number 10 were understood to be going through the 37-page document – with photos – on Wednesday morning.

The release of the senior civil servant’s full report had been delayed until the Metropolitan Police finished their investigation into COVID rule-breaking events at the heart of government – named Operation Hillman.

The conclusion of the Met’s separate inquiry saw a total of 83 people receive at least one fixed-penalty notice (FPN) each, for attending get-togethers over eight dates.

Overall, the police force issued a total of 126 fixed-penalty notices.

The prime minister received just one fine, for his 56th birthday gathering in June 2020 when indoor mixing was banned, along with his wife Carrie Johnson and Chancellor Rishi Sunak.

Reports had suggested the document would feature photographs of illegal gatherings. It is expected to include names of rule breakers.

George Eustice, the environment secretary, told Sky News on Wednesday that it was likely to be “quite critical”.

About 30 people, including Mr Johnson, have already been contacted by the Cabinet Office to warn them of the contents of the document.

It was reported on Wednesday morning that the UK’s most senior civil servant Simon Case would not be resigning and would not be sacked following the report.

While the Met Police investigation looked at 12 events, Ms Gray’s inquiry covered 16 that took place in 2020 and 2021, when COVID restrictions were in place.

An interim version of Ms Gray’s report, published at the start of the year, criticised “failures of leadership and judgement” in Downing Street and said some events should not have “been allowed to take place”.

The force asked that only “minimal reference” be made to events under investigation when Ms Gray provided the 12-page “update” to parliament on 31 January.

She explained at the time that the police investigation had meant she was “extremely limited” in what she could say and that it was “not possible at present to provide a meaningful report”.

Read more:
Sue Gray’s team reject claim she initiated meeting
What is the Sue Gray report and what can we expect from the full findings?

The prime minister will also be investigated by a Commons committee over claims he misled parliament.

Meanwhile, controversy has swirled over a meeting between Ms Gray and the prime minister ahead of the report’s publication during which, Sky News has been told, Mr Johnson implied that she should consider dropping it.

Number 10 has said that the prime minister did not ask her to drop the report or not proceed with the report.

It comes as new photos emerge of the events in Downing Street – raising questions over the Met’s decision making in particular relating to a leaving do in November 2020, where the prime minister was pictured with a drink in hand, but for which he did not receive a fine though others did.

Mr Eustice said there had been in some cases a “blurring of boundaries” between an “end of the working day” event – and “what became in some cases parties”.

Reports suggest that the prime minister will make a further public apology following the publication of Ms Gray’s report.

But Labour’s shadow financial secretary to the Treasury, James Murray, told Sky News: “I just don’t think there is anything he can say which can undo the damage which he’s done to trust with the British people.”