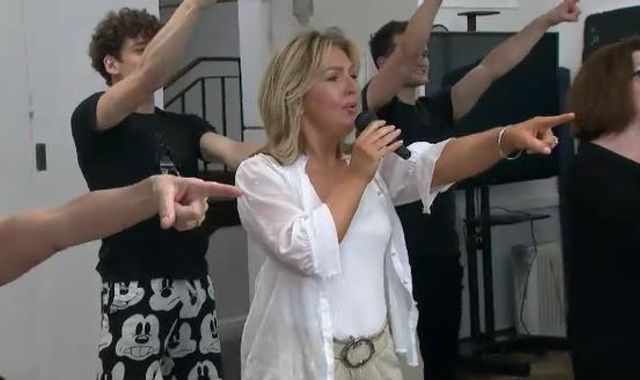 The cast of Mamma Mia! the Musical are among the stars taking part in next month’s Platinum Jubilee parade.

The pageant will weave its way through London on open-topped buses recapturing each decade of the Queen’s reign.

The musical performers will appear on their own float in the “Time of Our Lives” section of the carnival.

They’ve been working on a smaller, more compact version of what they do on stage, featuring a collection of ABBA‘s finest 1970s hits, to be performed for more than an hour on the float.

Mazz Murray, who plays the leading role of Donna, says it’s a “dream come true” to perform at the Platinum Jubilee – but it’s not the first time she’s had the honour of marking the Queen’s reign.

Twenty years ago, she joined Brian May on stage as a chorus girl for the Golden Jubilee show – after he famously opened the concert by performing God Save The Queen on his guitar from the rooftop of Buckingham Palace. The guitarist will deliver the first performance of this year’s concert too, along with the other members of Queen + Adam Lambert.

Ms Murray says the Golden Jubilee was one of the best days of her life, playing a huge role in her career.

How Brian May helped save her job

In 2002, she was part of the We Will Rock You musical, which had opened a few weeks before the Jubilee.

“We’d been panned by the critics,” she tells Sky News, “so we’d all been given our notice that we were closing.”

“At that time, [organisers] had asked Brian May to play on the roof at the Queen’s Golden Jubilee,” she continues. “And Brian said ‘I will, but I’d like you to have my company because they’ve all just got their notice. The show is closing.

“I’d like to give them this because they’re now all going to be out of work.’

“And brilliantly, everybody agreed it. Roger Taylor, Brian May and Ben Elton were instrumental in us being part of that.

“We then go live to the nation. We sing ‘Bohemian Rhapsody’, and I think ‘We are the Champions’. And the general public saw our show for the first time because it had only been in previews [until then].”

She says the concert led to the musical being sold out for nine years.

“It was that performance that carried We Will Rock You through and if it hadn’t been for Brian May saying ‘yes I’ll play on the roof but you have my company’, it would never have happened.”

The Platinum Jubilee pageant will involve more than 10,000 people, including the military, more than 6,000 volunteers, performers and key workers and 2,500 members of the public.

The blockbuster event will include performances from Ed Sheeran and Sir Cliff Richard, with more celebrities reportedly taking part – though organisers have not officially revealed all of the details.

Viewers can look forward to sights like puppet corgis, a giant 3D wire bust of the Queen, a tribute to seven decades of fashion, music and culture, and the Gold State Coach.