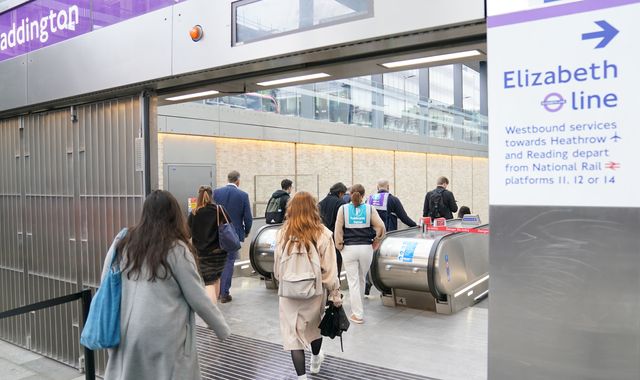 It will slash many journey times in the capital but is three-and-a-half years late and £4bn over budget.

It stretches from Reading and Heathrow in the west, through central London, to Abbey Wood in the southeast of the city and Shenfield in Essex.

A crowd of about 300 gathered outside Paddington Station to be on the first service.

It departed on time at 6.33am with excited train enthusiasts recording the moment on social media.

Colin Kelso, 18, travelled from Glasgow and wore a hoody with “Purple train” on the front, in reference to the line’s colour scheme.

Another keen commuter was pictured in a waistcoat matching the seat design of the new trains.

Read more:
Years of delays and billions over budget – but can Crossrail transform the capital’s fortunes?

The Crossrail project was one of Europe’s biggest engineering schemes but beset by delays, after originally being scheduled to open at the end of 2018.

The new trains were built in Derby and at 200m are the longest on London’s network, with walk-through carriages and space for 1,500 people.

A fire alarm prompted an evacuation of the Paddington platforms just before 9am but services resumed when it was found to be a false alert.

Despite the fanfare on Tuesday morning, services will also not yet run uninterrupted along the whole line.

Passengers must change at Paddington until autumn, while those going between central London and Shenfield have to change at Liverpool Street.

It will also be closed on Sundays to allow for more testing and software updates, and Bond Street station is still not ready.

But initial reactions to the Elizabeth line from London commuters were mostly positive.

Transport bosses will be hoping the faster, quieter trains and new stations will continue to impress – and also deliver on promises by Boris Johnson and London’s mayor of an estimated £42bn boost to the whole country.

Some have criticised the project as another example of bias towards the South East, with areas of the North left with slower and older train services between key cities.