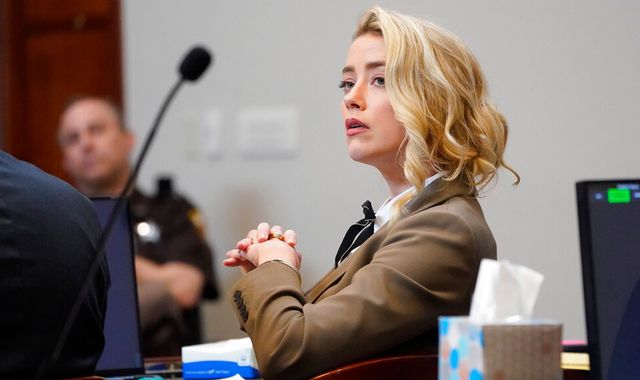 Amber Heard’s loss of earnings could be as high as $50m due to negative statements made by Johnny Depp and his attorney, an industry expert has told her libel trial.

Entertainment industry expert Kathryn Arnold made the claim as it emerged British supermodel Kate Moss, who dated Depp in the 1990s, is expected to appear in court by videolink on Wednesday.

Depp is suing Heard over an article she wrote in the Washington Post in 2018, which his lawyers say falsely implies he physically and sexually abused her while they were together.

This trial is taking place in Fairfax County, Virginia, after Depp lost a similar defamation case in the UK in July 2020.

Ms Arnold, who was being questioned by Heard’s legal team on Monday, used the example of "comparable actors" to measure what the 36-year-old’s career trajectory might have been without the negative statements made by Depp and his attorney Adam Waldman following the Hollywood couple’s split in 2016.

Ms Arnold said she chose actors who played superhero characters in their breakout roles, were good-looking, were a similar age, could do stunts and had good acting skills.

She said all of the actors she mentioned had worked with numerous big brands since their initial success.

However, she says Heard had not even managed to continue working for the one major brand she was employed by, with cosmetic company L’Oréal having paused her appearance in its campaigns.

She added that Heard was looking at losses of "as much as $8m (£6m) over time" due to loss of endorsement contracts.

Ms Arnold also said she thinks Heard made around a $2m (£1.6m) loss from her role as Mera in Aquaman due to not being able to negotiate a higher fee for the second film.

She says Heard had "no leverage" to increase her pay as she was "fighting to keep the role".

The industry expert added that she thought "over the course of five years it’s reasonable to think (Heard) would have been in one film per year for a minimum of $4m (£3.2m) per film… and so would have lost at least $20m (£16m) in earnings".

Ms Arnold concluded that Heard’s combined loss of earnings across film, TV and endorsements was between $45m (£36m) and $50m (£40m).

Earlier on Monday, hand surgeon Richard Moore said Depp could not have lost the tip of his middle finger the way he told jurors it happened in his civil lawsuit against Heard.

The finger injury, which occurred in a March 2015 fight in Australia between Depp and Heard, has been one of several key points of dispute in the lawsuit.

Depp says he was injured when Heard threw a vodka bottle at him.

Mr Moore told the jury on Monday that Depp had said his palm was down on a bar when it was struck by the bottle.

Moore, who did not treat the Pirates of the Caribbean star, testified that Depp’s description was unlikely, in large part because his fingernail remained intact.

The latest developments come as closing arguments were expected in the trial on Friday.