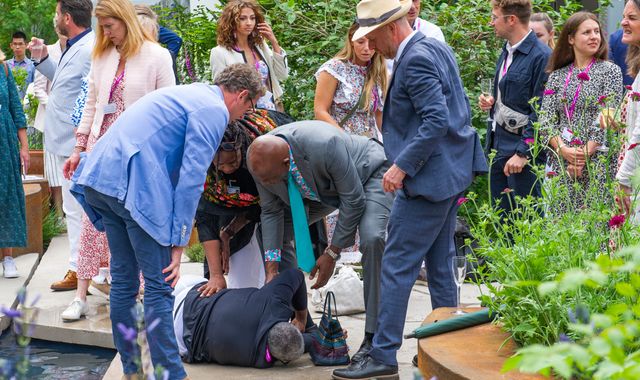 TV chef Ainsley Harriott helped rescue his sister after she fell into a water feature at the RHS Chelsea Flower Show.

Photographs show the TV presenter standing on the other side of the display in shock after Jacqueline Harriott tripped and landed in the water.

Members of the public can be seen helping to pull her to safety after the accident at the BBC Studios Our Green Planet and RHS Bee Garden.

Harriott is then seen leaning over his sister with his hand on her back as she rests on her side next to the water.

Celebrities including DIY SOS presenter Nick Knowles were watching on as the drama unfolded.

Harriott later tweeted that his sister was “fine” after she was reportedly treated by paramedics at the show.

The former Ready Steady Cook presenter posted on Twitter: “Just a big thank you to everyone who helped my sister when she had a fall at the Chelsea Flower Show.

“She’s doing fine and all is well.”

Harriott and his sister were attending the VIP launch of the show which is open to the public from 24 to 28 May.

Matt Peskett, an RHS volunteer who saw the accident, told The Telegraph barriers have been put in place to stop it happening again.

He said: “There were 30 or 40 celebs out and they were all drinking champagne. And then all of a sudden one of the guests stepped backwards and fell in. They fully fell in, not just a foot.

“I hope they don’t keep it like this tomorrow – it would be a shame.”

The Royal Horticultural Society, which puts on the Chelsea Flower Show, has said it is investigating what happened.

“The guest was quickly attended to by on-site medical professionals and we are pleased to say is now home and well,” the organisation said.