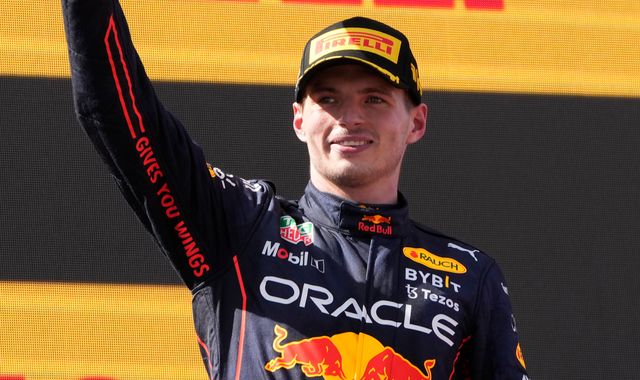 In a helter-skelter Barcelona race packed with incidents from start to finish, Leclerc had held a comfortable advantage out in front before the pole-sitter suffered a race-ending Ferrari issue on Lap 27.

"No! No! No power!" cried Leclerc on team radio before being called back to the pits.

Verstappen still had a lot to do from there – having dropped down the order following an uncharacteristic early spin before frustration over DRS problems and battles with George Russell – but he overcame the challenges to eventually go on a characteristic charge after three pit-stops.

He finished ahead of Sergio Perez in another Red Bull one-two, although the Mexican was disgruntled over team strategy.

"We’ll speak later," Perez told his team afterwards, Perez was unhappy that Verstappen had been put on an eventually preferable strategy, while he was also told not to hold him up when leading in the closing stages.

The gripping Spanish GP also included an impressive podium for Russell in the Mercedes, while team-mate Lewis Hamilton produced an epic recovery drive to fifth following a collision and puncture on the opening lap.

He had run fourth before being re-overtaken by Ferrari’s Carlos Sainz as Mercedes had reliability concerns over both cars in the closing stages, but the team will still be heartened by a much-improved weekend.

Verstappen, meanwhile, has his first title lead of the season, with his 19-point deficit to Leclerc suddenly a six-point advantage.

On a potentially pivotal day in the 2022 championship, Red Bull, having taken maximum points from the weekend, have also leapfrogged Ferrari in the team standings.

The Spanish GP hasn’t always been a classic in terms of excitement and a great race but it well and truly delivered in round six of the 2022 season.

The drama started on the first lap. Leclerc held the lead from Verstappen at the front but a few corners later there was contact further back, with Hamilton inadvertently tagging Kevin Magnussen. After bumping wheels, the Haas was sent off into the gravel before re-joining while Hamilton suffered a puncture and was forced into an early pit-stop.

"He knew what he was doing," fumed Magnussen, though stewards decided no investigation was necessary.

Hamilton was downbeat on team radio and even suggested retiring from the race before Mercedes rightly reminded him of the opportunities ahead.

Elsewhere at the start, Sainz went into anti-stall and got away poorly, dropping from third to fifth at his home race. The agony continued a few laps into the race as he made an unforced error, spinning into the gravel at Turn 4 and dropping to 11th.

He wasn’t the only driver to make the mistake, with Verstappen soon after going off at the same corner in a near copycat spin. It appeared a more pivotal error at the time, too, as he went from challenging Leclerc from second to dropping behind Russell and Perez in fourth.

Verstappen got past Perez before a hugely frustrating period for the reigning world champion. He had more pace than Russell’s Mercedes although suffered intermittent DRS issues in his Red Bull, which also plagued his qualifying.

Though the team attempted a fix pre-race, Verstappen would have his DRS flick up for some laps and not for others. On one lap he did get DRS, the straight-line speed aid, he appeared to get past Russell into Turn 1 before the Briton, amid a brilliant drive, forced his way back past.

That only increased the fury for Verstappen in the cockpit but he then was given the ultimate lift with his title rival Leclerc losing power on Lap 27. Ferrari have yet to diagnose the issue, only calling it Power Unit related.

Russell was suddenly the leader of the race and Verstappen promptly pitted, putting himself on a three-stop strategy, and giving Perez a chance to attack the Mercedes, which he did successfully to pass with little worries.

Perez had decent pace out in front but it was clear Verstappen was much faster behind. As he showed pace on fresher tyres in the late stages, Red Bull had a decision to make.

Not wanting their two drivers to risk ruining a one-two they told Perez to move aside, which he sportingly did. But he was not happy afterwards.

Hamilton had been towards the back for much of the race but when in clear air in the second half showed impressive speed and found himself up in sixth after his third and final pit-stop.

He passed Esteban Ocon and then Sainz in the Ferrari, a tell-tale sign that Mercedes are now an F1 2022 contender.

While his race ended on a slightly sour note with Mercedes detecting water leaks on their engines and asking their drivers to slow, leading to Sainz getting back ahead, it was a fine drive from the seven-time world champion, and one that his team insisted would have been good enough to win without his contact.

There were fine drivers elsewhere from Valtteri Bottas, while Lando Norris’ performance deserves praise given he was unwell in Barcelona.

The 2022 season continues next weekend with the jewel in F1’s crown, the Monaco GP.