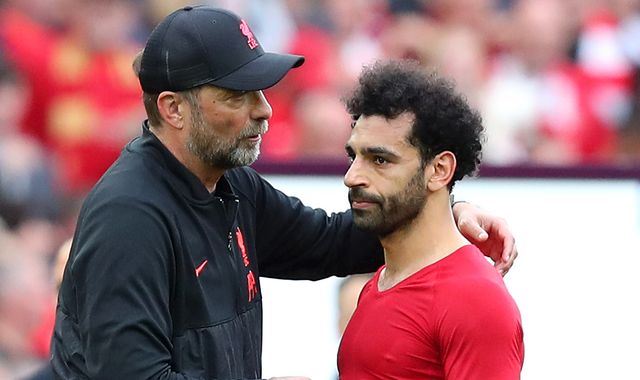 Jurgen Klopp paid tribute to his Liverpool players after Manchester City pipped them to the Premier League title by one point and says their near-miss will increase their desire to win the Champions League on Saturday.

Liverpool looked primed to capitalise on City slipping 2-0 down to Aston Villa at the Etihad but, despite going on to beat Wolves 3-1, a remarkable comeback from Pep Guardiola’s side for a 3-2 win ensured the Premier League trophy would stay with them.

However, FA Cup and Carabao Cup winners Liverpool have a shot at further silverware next weekend in Paris when they take on Real Madrid in the Champions League final and Klopp believes a seventh European crown would be the perfect response to narrowly losing out on league title number 20.

"The boys have played an incredible season," he said. "The whole journey, it’s absolutely exceptional.

"The game today said so much about these boys. We conceded an early goal, which gave us a knock. We didn’t play football like we usually play. We had to take Thiago off early. And then you still find a way, it’s outstanding. Ninety-two points is crazy.

"It’s the story of my life. I’m the record holder for not getting promoted from the German second division with the highest points tally, first division points tally as well. You have to get all the points.

"It was clear before the game a lot of things had to happen [for Liverpool to win the title]. Congratulations to Man City, Pep Guardiola, their players. We were close but in the end not close enough.

"But this season is incredible and will end next week. We have five days to prepare for the Champions League final. We face an incredibly experienced team but that’s OK. Losing the league today increased the desire to put it right next week.

"You can’t do more than give your absolute best and that’s what the boys did. I couldn’t be more proud, we had to chase the best team in the world to the wire but we will go again. We will build the team again and go again."

Reflecting on the twists and turns of the afternoon, Klopp said that while he wasn’t always sure what the scoreline was at the Etihad, the false claims that Villa had made it 3-3, which sparked jubilant celebrations in the Anfield stands, had him for a moment.

But ultimately, the drama of the final day summed up how evenly matched the top two are, he said.

"I wasn’t really aware of [the City score changes]. In my mind it was 1-0. I don’t know all the story. There was one moment when it was 3-2 then I don’t know why we thought they’d equalised again. That was a good moment! But then everyone went, ‘ah nothing happened’.

"The season was so close, so tight. Moments, decisions, these kind of things… What I’ve learnt about life is if you stay on track and keep going you get your rewards. Not today, but we will get it."

He added in an interview with Sky Sports: "Thank you to Aston Villa and Wolverhampton – they made a proper game of it. People think about integrity in football and I saw an opponent that was up for it."

Liverpool were able to bring Mohamed Salah on as a sub to score a golden-boot sharing goal but injured Virgil van Dijk remained on the bench. The hope is both will be fit for Saturday’s final but the fitness of midfielder Thiago is a concern.

The creator of Liverpool’s first goal limped off at the end of the first half and Klopp described his condition as "not good" but suggested the fact he was walking around on the pitch after the game with his family was a positive sign. "We want to wait until we know more about it," he added.