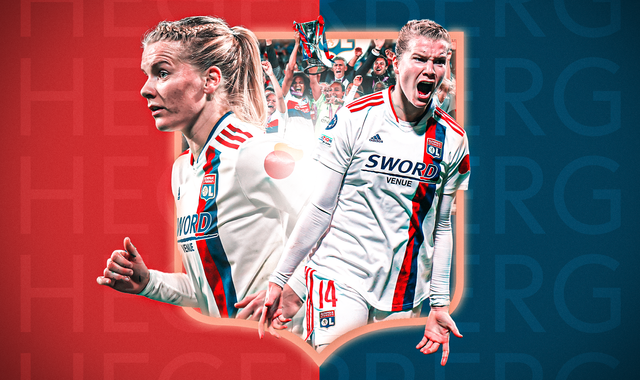 Lyon striker Ada Hegerberg admits she’s gone from a “very low point” to “feeling like a kid again” after putting 20 months of injury struggles behind her to play in the Champions League final against Barcelona.

The Norway striker was the reigning Ballon D’Or winner when she ruptured her ACL in January 2020 but hopes of getting back on the field later that year were destroyed when she fractured her tibia after returning to training.

This Saturday, however, Hegerberg will compete in her first final since coming back last October, a huge reward after more than a year and a half of physical and emotional struggles.

"It’s everything to me, I feel like a kid going to training every day. I never imagined myself being in this position a year ago," Hegerberg told Sky Sports News.

"Obviously, I was dreaming to get myself through those tough moments, but it’s just such a joy. All the hard work, the disappointments… we’ve come a long way. On a personal level, the past months and past weeks have been a joy and now being able to play another final again."

‘I was at a very low point’

Hegerberg was arguably the best striker on the planet before her injury and was the focal point of a Lyon side that won the Champions League five years in a row.

The Norway forward admits going from such a high to losing almost two years of her career hit hard at times.

"I’m not going to hide there were moments I was at a very low point. I never stopped believing and I always had faith in order to get back again. It’s something crazy that happens in your brain in tough moments, the focus shifts.

"I got through it and it made me stronger in many ways – as a woman but also as a footballer. Now I’m here for another ride, the second part of my career. It’s cool."

Lyon ‘going all in, we have nothing to lose’

Despite the long lay-off, Hegerberg remains the Champions League all-time leading scorer, a record she hopes to extend this weekend in the final against defending champions Barcelona.

Last season was trophyless for the usually dominant Lyon while Barcelona gained global attention by conquering Europe in a style rarely seen in the women’s game.

But Hegerberg insists the seven-time champions are not to be underestimated.

"I don’t think people have forgotten how good we are, people never forget history. Barcelona won deservedly last season but history is well printed into these walls here. It’s all about repeating, that’s the most difficult thing in sports today, to stay on top year-in, year-out.

"It’s important to look yourself in the mirror, analyse and see how we can do things differently in order to become top dog."

Last time Hegerberg played against Barcelona was in the 2019 final in Budapest. She scored a hat-trick as Lyon hammered their Spanish rivals 4-1. The Norwegian is expecting a different challenge in Turin on Saturday, though.

"It’s going to be a very difficult game against a very good team. They’ve managed to keep the same group of players, which is a strength in itself, we know that here at Lyon.

"It’s very interesting and fun to watch them play. Obviously, it’s a tough one, but we’re going all in, we have nothing to lose. We’re going to show up for the fans and it’s going to be a great final."