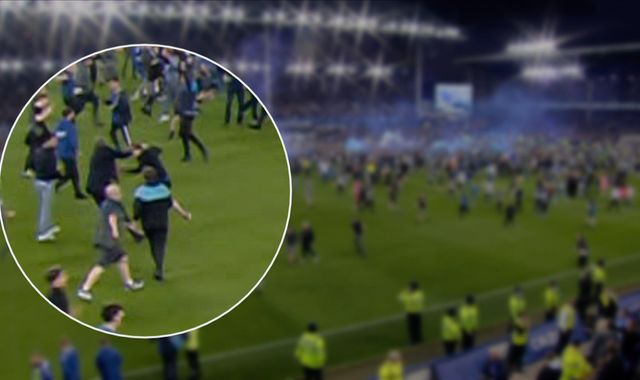 An altercation between Crystal Palace manager Patrick Vieira and an Everton fan is now under police investigation.

Footage emerged of the incident, which took place after a highly-charged relegation decider game.

The man had invaded the pitch with hundreds of other fans as the final whistle sounded after Everton beat Crystal Palace to secure their place in the Premier League next season.

Vieira was walking across the pitch towards his team’s dressing room at the other side of the ground when an Everton fan approached him, prompting a reaction from the Palace boss.

A statement from Merseyside Police said: “We are working with Everton FC to gather all available CCTV footage and are speaking to witnesses.

“No formal complaint has been received and enquiries into the incident are ongoing.”

When Vieira was asked about it in his post-match press conference, he said: “I’ve got nothing to say about that.”

He did say he was satisfied with how the pitch invasion was managed, adding: “The referee managed it really well.”

Everton manager Frank Lampard added: “I feel for Patrick and I didn’t get him [to shake hands] at the end because of the reaction. He ran across the pitch 80 yards in front of our fans, but there’s no issue. Just pure elation from our fans at staying in the league.”

The incident was one of two mass pitch invasions to take place yesterday, in a night of clashes condemned as “disgusting”.

Swindon won the first leg 2-1 at home but were beaten 1-0 by their hosts on Thursday night, with Port Vale eventually winning the tie 6-5 on penalties to progress to the League Two play-off final.

The deciding spot-kick was missed by the Swindon’s Ellis landolo, which prompted the home fans to invade the field as the visitors tried to make a hasty exit.

Speaking to Sky Sports, the Swindon boss said: “Players have been physically and verbally abused. I know I’ve seen it in some of the other play-off games.

“I don’t know where we’re going as a country. It’s absolutely disgusting.”

The evening’s ugly scenes came after a man was jailed for headbutting Sheffield United captain Billy Sharp during a pitch invasion after a match on Tuesday night.

And Sheffield United player Oli McBurnie was asked to attend a meeting with Nottinghamshire Police, after he was accused of deliberately stamping on a supporter at the City Ground.

The striker later endorsed a tweet suggesting he was trying to step over the person while nursing an injured foot.