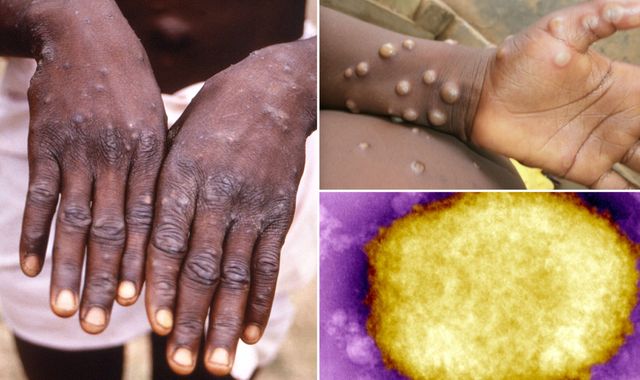 Monkeypox cases in the UK have more than doubled, with 11 more announced today.

It brings the total number reported in the country to 20 – although there are concerns many cases are going undetected.

Confirming the news, Health Secretary Sajid Javid said: “This morning I updated G7 health ministers on what we know so far.

“Most cases are mild, and I can confirm we have procured further doses of vaccines that are effective against monkeypox.”

Exactly what is driving the UK’s largest outbreak is a mystery – normally the disease is sporadic and linked to travel in parts of Africa, where it is endemic.

But it is “likely” the latest cases have spread within the UK.

The World Health Organisation (WHO) is expected to hold an emergency meeting on the virus today, as concerns have been raised about summer festivals.

The viral infection is similar to human smallpox and usually causes mild illness, with most people recovering within a few weeks and the UK Health and Security Agency says the risk to the UK population “remains low”.

Dr Susan Hopkins, the UKHSA’s chief medical adviser, said: “We anticipated that further cases would be detected through our active case finding with NHS services and heightened vigilance among healthcare professionals.

“We expect this increase to continue in the coming days and for more cases to be identified in the wider community. Alongside this we are receiving reports of further cases being identified in other countries globally.

“We continue to rapidly investigate the source of these infections and raise awareness among healthcare professionals. We are contacting any identified close contacts of the cases to provide health information and advice.”

Its similarities mean it can be treated with the smallpox vaccine, with previous data suggesting the vaccine is at least 85% effective in preventing the virus.

The WHO’s regional director for Europe has said he is concerned that the spread of the virus could speed up over the summer months as people gather for parties and festivals.

“As we enter the summer season in the European region, with mass gatherings, festivals and parties, I am concerned that transmission could accelerate, as the cases currently being detected are among those engaging in sexual activity, and the symptoms are unfamiliar to many,” Hans Kluge said in a statement.

It comes as Australia reported its first case of monkeypox in a traveller in his 30s who had recently returned from Britain.

The man’s case was confirmed on Friday after he arrived in Melbourne with symptoms earlier this week.

A second, probable infection has also been reported in a man in his 40s who had recently travelled to Europe and who developed a mild illness several days after arriving in Sydney.

Since 1970, human cases have been reported in 11 African countries, but the World Health Organisation said the “true burden of monkeypox is not known”.

Nigeria reports approximately 3,000 cases a year, usually in rural areas where people have close contact with infected rats and squirrels.

In 2003, the first outbreak outside of Africa happened in the US and was linked to contact with infected pet prairie dogs, which had been housed with Gambian pouched rats and dormice imported from Ghana. This outbreak led to 70 cases in the country.

In Africa, despite its name, it is usually spread by rodents – and doesn’t transmit easily between people.

But while the first case, reported on 5 May, was in someone who had recently returned from Nigeria, the others have no travel history.

A notable proportion of early cases detected have been in gay, bisexual, and other men who have sex with men – however, officials are saying it is not a sexually transmitted disease but that the virus is spread by prolonged skin-to-skin contact.

A public health campaign to alert these men is being considered by ministers.

How do you catch it, what are the symptoms, and how easily does it spread?

A rash can develop, often beginning on the face, then spreading to other parts of the body including the genitals.

The rash changes and goes through different stages and can look like chickenpox or syphilis, before finally forming a scab, which later falls off.

It can be confused with chickenpox as it begins with raised spots.

The symptoms will usually disappear in two to four weeks, although some people will need hospital treatment.

It said anyone with concerns they could be infected is urged to contact NHS 111 or a sexual health clinic.