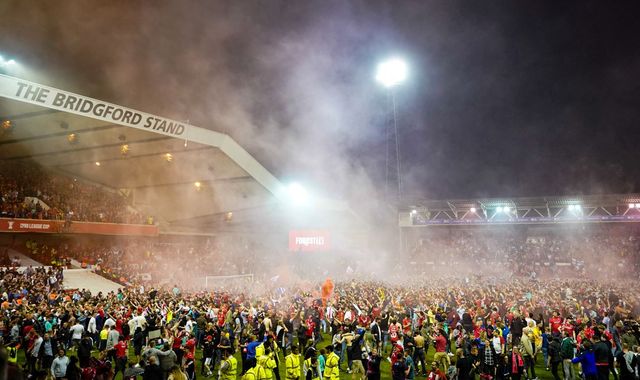 Paul Heckingbottom called on authorities to exact the most stringent punishment after Billy Sharp was attacked in the wake of Sheffield United’s play-off semi-final defeat at Nottingham Forest.

The Blades overturned a two-goal deficit to level the tie at 3-3 on aggregate and force extra-time and penalties at the City Ground but their spirited fightback was extinguished in the shootout when goalkeeper Brice Samba saved three spot-kicks to send Forest to Wembley.

Forest jubilation at the prospect of ending their 23-year absence from the Premier League, providing they beat Huddersfield in the final on May 29, spilled from the stands into a pitch invasion which was overshadowed by an unprovoked attack on Blades striker Sharp.

Sharp, who was injured and did not feature for Sheffield United in the play-off semi-final second leg, watched on from the touchline as the Forest supporters celebrated their 3-2 penalty shootout victory before appearing to be blind-sided by a charging supporter.

Manager Heckingbottom condemned the attack which is understood to have left Sharp requiring stitches.

He told Sky Sports: "I watch every Monday Night Football, every Super Sunday, my time up in Scotland, there has been so many people talking about seeing things thrown on the pitch, fans invading the pitch, seeing things that put players’ health and safety in danger. And nothing is ever done about it. There will be something done about this.

"We’ve seen it. We know what has happened. There is a prison sentence there without a doubt. How can you come to your place of work, minding your own business and get assaulted in that fashion? It’s bang out of order. Too many times we’ll hear people condemning it and nothing is done about it. We’re the ones that suffer. It’s upsetting for a lot of reasons."

Nottingham Forest moved swiftly to denounce the attack on Sharp, who played for the club on loan during the 2012/13 season, issuing an apology and vowing to ban to his assailant for life.

"Nottingham Forest Football Club are appalled to learn that our former player, Billy Sharp, was assaulted leaving the pitch after tonight’s match at The City Ground," a statement read.

"The Club will work with the authorities to locate the individual in order they are held to account for their actions, which will include a life ban from Nottingham Forest.

"The Club would also like to apologise to Billy personally and to Sheffield United Football Club."

Former Nottingham Forest defender Michael Dawson, who was pundit for Sky Sports at the City Ground, expressed his disbelief at the attack on Sharp.

"That’s an absolute disgrace," he said. "Too many people run on the pitch, we’ve spoken about Forest having a special night but Billy Sharp was stood there doing nothing wrong. And one stupid fan runs on and does that has spoilt everything. I hope Sharp is OK.

"It happens every year at the end of a season when one team has disappointment and one team has joy, I worry for the opposition when fans run on. It only takes one situation for someone to be really hurt."

"It does concern me when fans run on. It ruins it a little bit. I understand fans want to go on, but idiots can ruin it.

"When is this going to stop. When are people going to realise in society that this isn’t acceptable?"