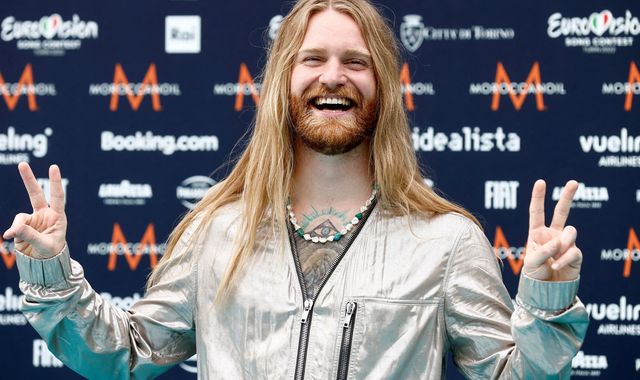 Ukraine and the UK are the favourites as the final countdown begins to tonight’s annual Eurovision extravaganza, taking place in Italy.

Hundreds of millions are set to tune in for one of the world’s most-watched TV events, with a song about Meghan Markle and a track called Give That Wolf a Banana among the 25 finalists.

TikTok star Sam Ryder is representing the UK and should be assured of avoiding the unfair nil-points debacle of James Newman’s entry last year.

His song, Space Man, has put him among the frontrunners and he’s going fourth from last – which is normally a good thing.

Ryder will also be hoping some of his 12 million followers get on board with the public vote.

The Essex singer-songwriter – who’s 6/1 second-favourite at Ladbrokes – said the song was written 18 months ago and he never intended it to be used in the contest.

He’s also not worried about his rank on the Eurovision leaderboard.

“I get to sing in a room and connect with people and not think about where I come on a scoreboard,” he told Sky News.

“It’s for the love and the joy of singing. This is something that celebrates inclusivity, expression, love, peace, joy, togetherness…” added the singer.

Ryder is up against a Ukraine entry that could well surge to victory in a show of support for the war-torn country – with the odds tipping them to hoover up the big points.

Hip hop outfit Kalush Orchestra perform Stefania, a track that mixes traditional Ukrainian folk instruments with modern sounds, and is a tribute to the mother of one of its members.

The Ukrainian TV commentator for the contest, Timur Miroshnychenko, was even forced to broadcast from a bomb shelter during the semi-final.

If the country does win, the suggestion is the UK would be the preferred candidate to host next year – if the war is still going on.

Other notable hopefuls include Serbian artist Konstrakta, whose peculiar song references Meghan Markle and begins with the lyrics (translated to English): “What could be the secret of Meghan Markle’s healthy hair?

“What could it be? I think it’s all about the deep hydration.”

Eurovision fans seeking more weird and wonderful Europop should also look out for the yellow “alien” heads of Norway’s Subwoolfer and their song Give That Wolf A Banana.

Others tipped to do well include Sweden’s Cornelia Jakobs and defending Eurovision champions Italy.

The home nation is pinning its hopes on two of its most popular young stars, Mahmood and Blanco.

Mahmood, from Italy’s X Factor, was second at Eurovision three years ago, while singer and rapper Blanco topped the charts for eight weeks last year.

Italy’s northern city of Turin is hosting the show after Italian rockers Maneskin stole the show in Rotterdam last year.

Eurovision’s grand final is hosted by Graham Norton and starts on BBC One on Saturday at 8pm.