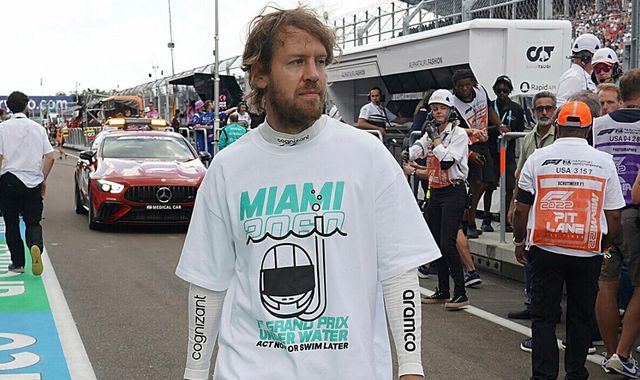 Sebastian Vettel says his feelings about renewable energy and climate change do make him question his position as a Formula 1 driver.

The 34-year-old, who is four-time world champion, often speaks out about issues he believes in and recently wore a t-shirt at the Miami Grand Prix which read: "Miami 2060 – 1st Grand Prix Underwater – Act Now or Swim Later."

"It’s not a political message, I’m not a politician, I don’t want to be political. It’s a very human message," he told Sky Sports. "It’s great that we have a race here, there are great people here and it’s very exciting.

"But, I find it alarming and I’m surprised we go to a place that’s not going to be there in 50 years’ time and everybody acts and carries on business as usual."

Vettel then made an appearance on BBC Question Time and spoke about the dilemma his passion for Formula 1 and his views on climate issues brings.

"Every time I step in the car, I love it," he said. "When I get out of the car, of course I’m thinking is this something we should do, travel the world, ‘wasting’ resources?

"On the other hand, we are entertaining people, during Covid we were one of the first sports to start again and there were races back on.

"In terms of entertainment, there are sports, culture, comedy and a lot of people who could not perform [during that time]. A lot of people missed that and if we did not have this, in general, we would probably go mad."

Vettel openly acknowledged that working in Formula 1, with the beliefs he holds about the need for renewable energy, makes him hypocritical due to the nature of the fuel used within his sport.

"It does," he said. "You’re right when you laugh because there are questions I ask myself every day. I’m not a saint.

"I’m very concerned when it comes to the future, so these topics; energy, energy dependence and where we go in the future.

"On energy, we need to stop being dependent [on fossil fuels], and we can, because there are solutions in place.

"You know, in Britain, you have this sort of goldmine you’re sitting on, which is wind, and you have the ability to increase your energy supply with wind power, solar.

"Every country has its strengths and weaknesses. If you go to Austria, they have the Alps and they have water, they can pump it up, store it, take it back down."

Share
Facebook
Twitter
Pinterest
WhatsApp
Previous articleBedfordshire: Brazen criminal taunted police by posting ‘catch me if you can’ under his wanted appeal
Next articlePollen count spike this weekend could cause life-threatening asthma attacks, charity warns