Fabinho: Liverpool midfielder out of FA Cup final against Chelsea with muscular injury 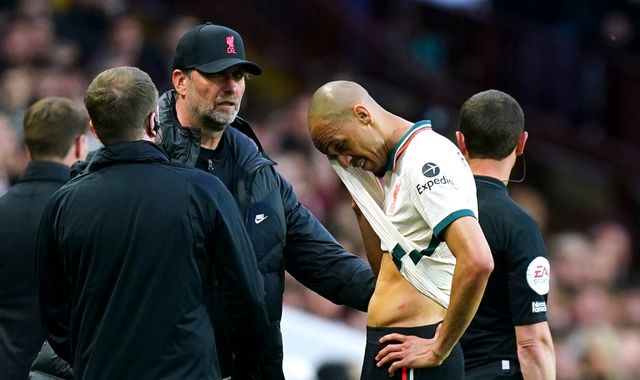 Fabinho will miss the FA Cup final between Liverpool and Chelsea on Saturday
through injury.

The Brazilian was forced off in the first half of Tuesday’s Premier League victory at Aston Villa with a muscular injury.

Jurgen Klopp still hopes there is a possibility Fabinho can play again in the 2021/22 season, as Liverpool still aim to complete the Quadruple.

Klopp told Liverpoolfc.com: "There’s a good chance that he will be back whenever – not for the weekend but whenever."

Their final league game is at home to Wolves on Sunday May 22 before they prepare for the Champions League final against Real Madrid in Paris on May 28.

While Pep Guardiola has been bemoaning his team’s injury problems, Liverpool’s loss of Fabinho could have wider ramifications beyond the Premier League title race. Already ruled out the FA Cup final, will he be fit for the Champions League final that follows?

The importance of the Brazilian can hardly be overstated. A towering figure at the base of Liverpool’s midfield, Klopp leans heavily on him to protect the defence in the air and on the deck, particularly when covering for those marauding full-backs.

Indeed, Klopp has only gone without Fabinho in his starting line-up on three occasions in the Premier League since the turn of the year – against Norwich, Watford and Newcastle.

The only Champions League game that he has sat out in 2022 was the second leg against Benfica – which just happens to be the only time this year that Liverpool have conceded three goals in a game. A swift return could be crucial to his team’s hopes.

May 17 – Southampton (a) Premier League, live on Sky Sports