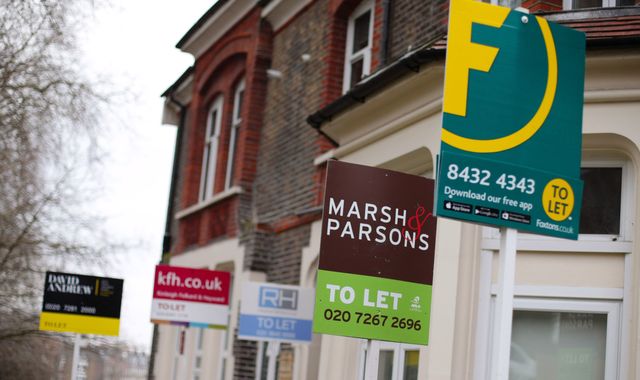 A sharp rise has been seen in the number of renters seeking properties with all bills included in the face of the soaring cost of living, research shows.

Inquiries for build-to-rent listings that also cover utility costs have leapt by 36%, according to the property website Rightmove.

It comes as millions of people are wrestling to manage their household budgets with soaring gas and electricity bills.

Tenants are also staying longer in a property to avoid being faced with a hike in rent when moving to a new place, the research shows.

Most tenancies are lasting more than two years (63%), and only one in five tenants (21%) stay for a year or less.

The average monthly rent being advertised across Britain (excluding London) was a record £1,088 in the first quarter of 2022, marking an 11% annual increase, Rightmove said.

In London, average asking rents have shot up by 14% annually to £2,195 per calendar month.

There are also more than triple the number of tenants inquiring than rental properties available, making the market highly competitive, according to the website.

Nearly two-thirds (63%) of landlords told Rightmove they have kept rents the same for their tenants over the past year.

Read more: The four simple changes you can make to save £400 on your energy bills

Tim Bannister, Rightmove’s director of property data, said: “A shortage of rental homes and strong demand for the properties available has led to a greater number of tenants choosing to renew their leases and stay put, rather than re-enter a competitive rental market.

“People who had been waiting to see what happened last year are now being faced with record rents and so are seeking out properties where they can have more certainty over their outgoings, with all bills included becoming increasingly sought after.”

He added: “Landlords may have been tempted to put their rents up given the high demand from new tenants, but many understand the affordability challenges of rising rents and bills, as our study shows that the majority are charging their tenants the same as a year ago.

“Many landlords build up a relationship with their tenants over a number of years, and they will want to keep a good tenant for longer if they can, rather than cash in on a rent rise in the short term.”