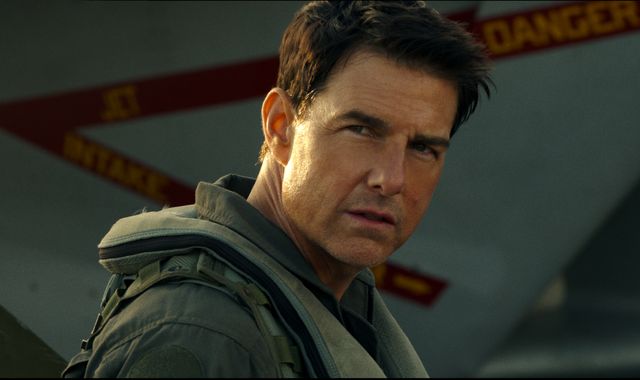 With 36 years having passed since the first time Top Gun landed on our screens it’s no surprise our lead – the charming and disobedient Maverick, reprised of course by an incredibly charismatic Tom Cruise – is now being referred to as a relic.

His kind will be extinct soon as new remote technology negates the need for pilots. But wait – there’s time for one last mission before his naughty antics see him put out to pasture and Captain Pete Mitchell is sent back to Top Gun to train some other apparently brilliant pilots to be, well, as good as he is.

These youngsters may be the best the Navy has but they’ve still got plenty they can learn from our Mav. Oh, and one of them is none other than his former wingman’s son, clearly not happy that his dad’s old pal is now ordering him around.

And it’s not just Maverick who’s back – he’s brought with him his jacket, aviators and that iconic music from the original.

Nostalgia fills the audience with glee before the film has barely begun as the familiar notes set the tone for what will be a welcome walk down memory lane.

But the movie treads a delicate balance between the old and the new. The throwbacks to the original are plentiful and include a clever and touching cameo from Val Kilmer, while the new includes a love interest in the form of Jennifer Connelly.

Beautiful and capable, her character Penny teaches our new teacher some lessons of his own – whether in a bar or on a boat.

And beach sports fans need not worry – volleyball is out but American football provides the oiled-up bodies we expect – no, demand – from a Top Gun film.

Yes it’s unfathomable that Maverick is still the US’s best pilot, yes there are far too few female characters (just one in the best of the best cohort), and yes Miles Teller is sporting some questionable facial hair – but to borrow a line from the script – don’t overthink it.

‘Cruise at his megawatt A-lister best’

The soundtrack slaps, John Hamm and Ed Harris are great fun as our tough Navy boss types and the final act manages to be masterfully tense, genuinely funny and ultimately very sweet and heart-warming.

Plus this is Tom Cruise at his megawatt A-lister best, reminding us all why he’s one of the world’s biggest movie stars – it’s hard to believe he was in his fifties while filming this.

Indeed we’ve all got a little older while waiting for this sequel to finally hit cinemas – not only is it decades since the original came out, filming for Maverick took place in 2019 and its 2020 release was pushed back by the pandemic.

It raises a wry smile when Maverick is told towards the start of the film "the future is coming, and you’re not in it" – little did the cast and crew know that the film would come out years after it was scheduled to.

But now it’s here it’s likely to become one of the year’s biggest blockbusters.

It’s not an easy task to revive an old product and make it appealing to both fans of the original and those that weren’t born when it first came out but that’s what the film-makers have achieved.

While Maverick may feel the need for speed, perhaps taking things more slowly – indeed waiting 36 years – was the best method to ensure this sequel takes off at the box office.

You can see Sky’s exclusive interview with Tom Cruise in Tom Cruise: Movie Maverick on Sky Showcase and Sky Max on Saturday 21st May at 8pm.

Sky News will be live at the Top Gun premiere with all the cast from 5pm on Thursday 19 May.

Top Gun: Maverick is in cinemas from 25 May