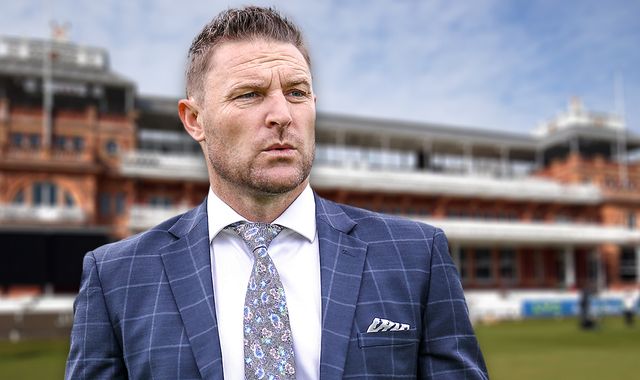 Brendon McCullum has been appointed as the new head coach of the England men’s Test team.

The 40-year-old’s appointment – on a four-year deal – follows a series of interviews held by the England and Wales Cricket Board (ECB) for both the red and white ball head coaching roles, which have been split under new managing director of England men’s cricket Rob Key.

The new white-ball head coach is expected to be named next week, with Paul Collingwood remaining as a favourite for the role and Australia women’s coach, Matthew Mott, also a leading candidate.

Former New Zealand captain McCullum, who played 101 Test matches for the Kiwis, will take charge for England’s three-match Test series against the Kiwis, which begins on June 2 at Lord’s, subject to obtaining the necessary work visa.

McCullum will link up with newly-appointed England Test skipper Ben Stokes after completing the Indian Premier League season in his role as head coach of the Kolkata Knight Riders, who play their final group stage game on May 18.

"We are delighted to confirm Brendon as England Men’s Test head coach," Key said. "It has been a real privilege to get to know him and understand his views and vision for the game. I believe his appointment will be good for England’s Test team.

"He has a recent history of changing cricket culture and environments for the better, and I believe he is the person to do that for England’s red-ball cricket.

"We were incredibly fortunate to have a seriously strong list of quality candidates for the post, with Brendon demonstrating he was our number one choice."

McCullum’s emergence as a candidate for the red-ball role came as somewhat of a surprise, with many having considered him better suited to the white-ball position, given he has coached exclusively in shorter forms of the game since his retirement from playing in 2019.

McCullum retired from international cricket in 2016 having played 260 ODIs across 14 years, scoring 6,083 runs, while also playing in 71 T20Is. He was the first batsman to score two hundreds in T20I cricket.

However, his accolades were not limited to short-form cricket. In 2014, he became the first New Zealander to score a triple hundred in a Test, while in his final game before retiring in 2016, he posted the fastest-ever Test century, off 54 balls, beating Sir Viv Richards’ 56-ball record.

Chris Silverwood was sacked as England head coach after the 4-0 Ashes defeat over the winter, with Paul Collingwood placed in interim charge for the 1-0 Test series defeat in West Indies in March.

England had lost 10 and won just one of their previous 14 Test matches under Silverwood, failing to pass 300 even once during a dismal Ashes campaign.

Root resigned as captain weeks after the West Indies series, ending his tenure with 27 wins, 26 defeats and 11 draws across 64 matches after taking over from Sir Alastair Cook in February 2017.

Stokes subsequently stepped up as skipper, with the all-rounder and head coach McCullum now looking to galvanise a side currently fifth in the ICC Test rankings and bottom of the 2021-23 World Test Championship.

"I’d like to say how pleased I am to be given this opportunity to positively contribute to England’s Test cricket set-up and move the team forward into a more successful era," McCullum said.

"In taking this role on, I am acutely aware of the significant challenges the team faces at present, and I strongly believe in my ability to help the team emerge as a stronger force once we’ve confronted them head-on.

"I’ve enjoyed several robust conversations with Rob Key about the direction of travel for the team and have found his enthusiasm contagious. I’m no stranger to bringing about change within a team environment, and I can’t wait to get started.

"Ben Stokes is the perfect character to inspire change around him, and I look forward to working closely with him to build a successful unit around us."

Watch Brendon McCullum’s first series in charge of England live on Sky Sports, as his side take on New Zealand in three Tests, starting at Lord’s on June 2.

Share
Facebook
Twitter
Pinterest
WhatsApp
Previous articleUkraine war: Vladimir Putin ‘humiliating himself on the world stage’, says Liz Truss as she calls for allies to do more for Kyiv government
Next articleFabinho: Liverpool midfielder out of FA Cup final against Chelsea with muscular injury