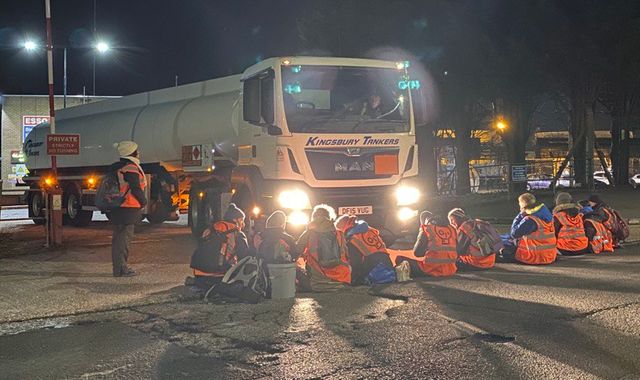 At least six people have been arrested after environmental activists blocked a number of “key oil” terminals across the country.

The Just Stop Oil group claimed demonstrations are taking place at 10 “critical oil facilities” in Essex, Hertfordshire, Birmingham and Southampton to demand that the government stops new oil and gas projects in the UK.

It added that the protests could have a “potential impact on fuel supply for London and the South East”.

“Fed up with a government burning your future – join us on the road,” the group tweeted.

So far, six protesters have been arrested at three locations in Thurrock, Essex Police said.

The force tweeted: “We are currently dealing with three incidents in Thurrock, where a group of people are reportedly blocking the roads.

“It is impacting Navigator Fuel Centre, Esso in Purfleet, and Askew Farm Lane.

“Drivers are asked to avoid the area.”

In Birmingham, West Midlands Police confirmed a protest was taking place at a site in Tyburn and officers were dealing with the incident “as quickly as possible”.

The force urged drivers to avoid the area and warned of delays along Wood Lane, Bromford Lane, and Tyburn Road.

Demonstrations are also taking place at a number of Exxon Mobil UK sites, the company said, causing operations to be temporarily suspended.

“Small protests are currently underway outside our Hythe, Birmingham and West London fuel terminal,” it said on Twitter.

“While we respect the right to peaceful protest, our priority is the safety of our people, our neighbours, the protesters and our operations.”

The firm added that it had temporarily suspended operations at the locations mentioned, but its other terminals at Purfleet and Avonmouth were not affected.

What is Just Stop Oil trying to achieve?

In recent weeks, Just Stop Oil supporters have caused disruption at Premier League football matches by running onto the pitch and tying themselves to goalposts.

In a statement, the organisation said it is “demanding an end to the government’s genocidal policy of expanding UK oil and gas production”.

“It’s funding war and killing people in the global south while destroying the future for young people everywhere.”

The demonstrations come ahead of planned daily protests by Extinction Rebellion, which are due to begin on 9 April.

Protesters are due to meet at 10am in Hyde Park, London, next Saturday, where they are expecting “huge numbers” of people to join.

“In the tradition of non-violent civil disobedience, we will disrupt business as usual until the Government and big business make change. We need everyone to join us.”

He added that the plan was to “blockade” oil terminals for “as long as possible”.