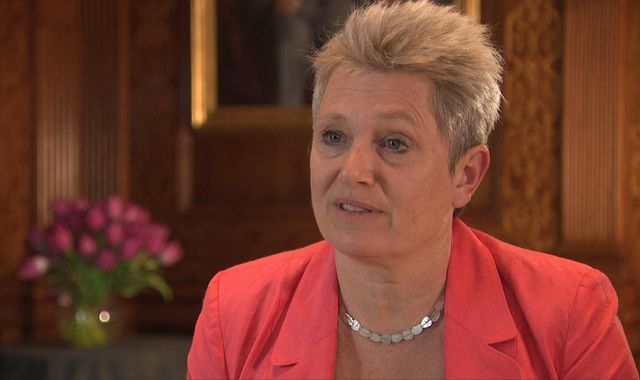 The former head of the vaccines taskforce has told Sky News the pandemic is “far from over” as she revealed how a rude Lily Allen song helped her deal with severe criticism over her role.

Dame Kate Bingham, who was head of the UK Vaccine Taskforce in 2020, told Beth Rigby Interviews… she does not think the pandemic “is quite there yet” when asked if COVID is now endemic.

Asked if COVID is “over” as all restrictions are lifted on Friday, she said: “No, it is not over. It is far from over.

“So what we know is we had the Delta variant that was really very serious last year, we are now in the middle of Omicron and this could continue to evolve, and new variants could out-compete.

“The question is will it ultimately end up as a seasonal flu type disease, and we hope that is where it will end up.”

‘I knew it was most likely to fail’

Dame Kate was put in charge of procuring vaccines and figuring out how to deploy them in the early days of the pandemic.

“The first thing was that we had no vaccine against any human coronavirus, so we had no template or play book to follow.

“The second thing was that vaccines historically take five to 10 years to develop. The quickest was at four years, and that was done 15 years ago, and we didn’t know anything about this new virus.

“So we had so many reasons to be sceptical that this was possible. And to be able to go from sequence to start vaccinating people in a year, which is what we did, was not what we expected to do at the beginning because we knew that most vaccines fail.”

How she became head of vaccine taskforce

Despite the ultimate success of the vaccine, Dame Kate received much criticism for the unpaid role after it was revealed Boris Johnson had not launched a recruitment process.

She was also criticised for her links, having gone to school with the PM’s sister and her husband is Tory MP Jesse Norman, who was a Treasury minister under Mr Johnson and Theresa May.

A venture capitalist by trade, she was later praised for securing 350 million doses of six vaccines and setting up infrastructure for clinical trials, manufacturing, and distribution.

Revealing what happened, she said it was chief scientific adviser Sir Patrick Vallance who first invited her to join a government advisory group on vaccine procurement.

“My job for the last 30 years has been to develop novel drugs to treat unmet diseases,” she said.

“So when Patrick then asked me to join the expert group, I asked him why, since I don’t know anything about vaccines.

“And he said, but you understand the small company landscape, and it’s that innovation landscape, which is actually where the bulk of the vaccines have come from.”

Dame Kate then received a text from then-health secretary Matt Hancock saying the PM wanted her to head up the taskforce.

She said she would do it but only if it was just for six months, she could have a quick decision-making process, and she could hire her own team.

“I had the entire imposter syndrome. I can’t do it, and I’m not the right person,” she added, but then realised they needed someone who could organise the whole programme, not somebody who knew everything about vaccines.

‘Lily Allen has a great song’

Reflecting on the criticism she received for her links to the government and on whether that hurt, she said: “Yeah, of course, it did. It’s very bizarre when you’re not used to being in that world, to have a whole lot of people say a whole lot of lies about you, and you can’t respond.

“I mean, it’s really bizarre. Lily Allen has a great song, and so I used to go running in the dark with a head torch on, listening to Lily Allen.

“And it was great. And I’m not going to say the name of the song in public.”