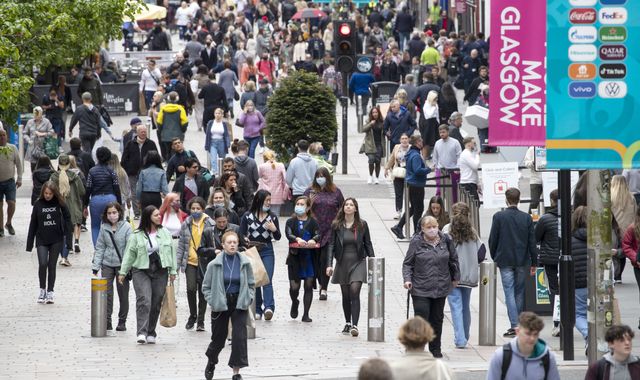 The UK economy grew at a rate of 1.3% in the last three months of 2021, a faster pace than first thought and bringing GDP to just below pre-pandemic levels.

The Office for National Statistics (ONS) had previously estimated GDP grew by 1.0% between October and December last year.

“GDP grew a little stronger than we first thought in the fourth quarter, meaning it is now only 0.1 per cent below its pre-pandemic level,” said Darren Morgan, the ONS director of economic statistics.

The UK’s economy grew by 7.4% last year in a record rebound from a devastating 2020, according to the latest ONS estimates, but just missed the 7.5% initial estimate.

The ONS also revised its estimate of how much GDP collapsed at the start of the pandemic – drawing the number down from 9.4% to 9.3%.

The news comes amid a cost of living crisis in the UK, with living standards set for their largest drop on record thanks to a perfect storm of rising inflation, the economic hit of the pandemic and Russia’s invasion of Ukraine.

Wages are failing to keep up with rising prices, according to the UK’s fiscal watchdog, as rapidly rising energy prices push inflation towards 9%, its highest level in 40 years.

According to the Office for Budgetary Responsibility (OBR), Russia’s invasion of Ukraine has had “major repercussions for the global economy, whose recovery from the worst of the pandemic was already being buffeted by Omicron, supply bottlenecks, and rising inflation”.

The war has left oil and gas prices far higher than their historical averages – a fact that will “weigh heavily on a UK economy that has only just recovered its pre-pandemic level”, the OBR said in its report released on Wednesday.

Higher energy bills will lead to further inflation, which in turn will put pressure on household consumption and erode incomes.

Coupled with rising taxes, this fall in spending power will lead to a decline of 2.2% in living standards this year and next – the largest fall on record.

As a result, living standards will not recover to their pre-pandemic level until 2024-25, the OBR added