Rebel Tory Tobias Ellwood: I was going to withdraw no-confidence letter until PM said Ukraine fight was like Brexit 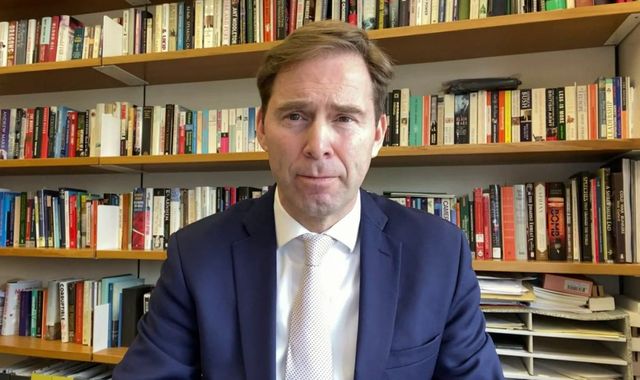 A rebel Tory MP said he was going to withdraw his letter of no confidence in Boris Johnson – until the prime minister compared Ukraine’s fight for survival with Brexit.

Tobias Ellwood, a former defence minister, said such comments take the UK “back a couple of steps” when working with international partners.

Mr Ellwood was one of a number of Conservatives who submitted no-confidence letters last month amid growing backbench disquiet over revelations about parties in Downing Street during lockdown.

The clamour has been more muted in recent weeks as the focus shifts to the government’s response to Russia’s invasion of Ukraine.

Mr Ellwood had considered withdrawing his letter after the PM acknowledged the need for a Number 10 shake-up.

But he told Sky News that was before Mr Johnson’s speech drawing parallels between Britain’s departure from the EU and Ukraine’s battle to stop being overrun by Vladimir Putin’s armed forces.

The MP, who chairs the Commons defence select committee and was speaking during a visit to Poland, said of his initial no-confidence letter: “You can’t ignore the fact that our party lost its way.

“We were not exhibiting the leadership, the statecraft, that we are capable of and I think that the nation expects.

“If some of us hadn’t chosen to speak out I was worried that we would continue to drift.

“The prime minister has now acknowledged this, a new team has now been formed.

“But the last time that I considered withdrawing my letter – given that I was pleased with the progress that was made – we then get a speech where the freedoms of Brexit are compared with the very freedoms that Ukraine are fighting for.

“However well intended, that did not go down well here or indeed in Ukraine – both Poland and Ukraine want to be part of the EU.

Mr Ellwood said he was “astonished” when he heard of the speech.

“Brexit had happened, let’s just get on with it, why do we keep reminding ourselves of it?

“We have a higher cause, a bigger threat to focus on.

“We’ve got to work with our international partners. We’ve done a great job.

“But every time we have a comment such as this it takes us back a couple of steps and that’s rather unfortunate.”