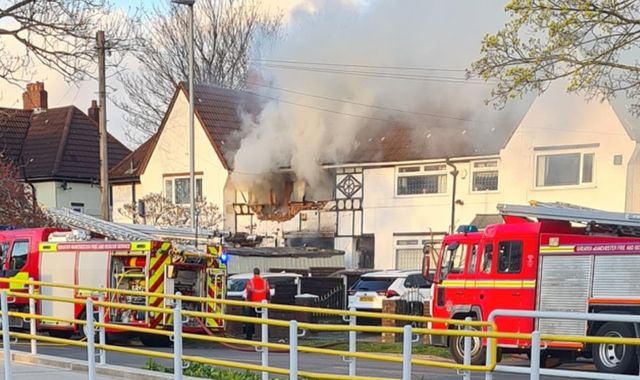 An elderly man has been found dead amid reports of a gas explosion in Manchester.

A number of homes had to be evacuated as emergency services went to Brownley Road in Wythenshawe in the south of the city on Thursday evening.

Greater Manchester Fire and Rescue Service said they were called to reports of a fire at a domestic property.

Several properties were left without power and road closures had to be put in place, Greater Manchester Police said.

The force confirmed that a man had been found dead inside a property.

Their spokesperson added: “Investigations are ongoing and officers are supporting the deceased man’s family.”

The scene was made safe around 8pm, they added.

An image from the scene appears to show thick smoke billowing from a heavily damaged property surrounded by fire engines.

In a statement on Thursday night, Greater Manchester Fire and Rescue Service said: “At around 6.30pm today (31 March), crews were called to reports of a fire at a domestic property on Brownley Road in Manchester.

“Firefighters assessed the scene and are using breathing apparatus and hose reels to control the fire and make the scene safe.

“Crews are working with colleagues from Greater Manchester Police and North West Ambulance Service and are currently still on the scene.”