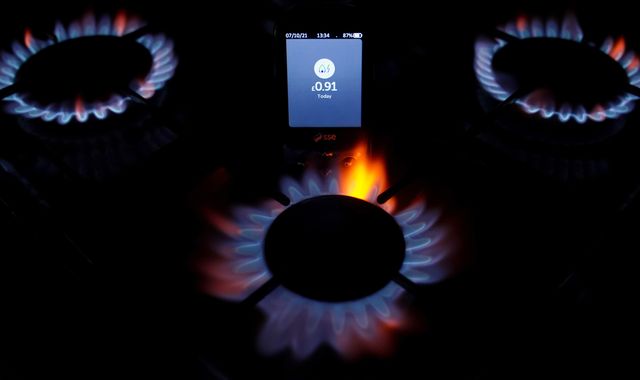 Energy customers around the country have been struggling to submit gas and electricity meter readings, a day before prices are set to soar when the price cap is raised.

Millions of households will see their energy bills rise to a typical £1,971 a year when the cap is changed on 1 April.

The 54% increase announced by regulator Ofgem, which will add £693 to the annual costs of a typical household, follows a 12% rise in October.

Users reported being unable to access the websites of energy giants such as British Gas, SSE, E.ON, and EDF, to submit their meter readings.

On Twitter, E.ON took aim at Money Saving Expert founder Martin Lewis, who has encouraged consumers this week to take their meter readings before tomorrow to save money.

In a tweet that has since been deleted, E.ON said: “Unfortunately the website and phone lines of every supplier are being hammered today. Martin has once again created unprecedented demand bringing down Britain.”

The company said in a separate tweet that its comment about Mr Lewis had been a poor attempt at humour.

Mr Lewis has long been an adversary of the energy industry, pointing out the ways in which he says companies take advantage of their customers, and advising users on the best ways to pay less.

Why is everyone taking a meter reading today?

Consumer advice groups have urged Britons to take a reading and submit it to their provider before the price cap is raised on Friday, to avoid being charged a higher rate for energy they used before then.

Mr Lewis said earlier this week that if customers took a meter reading on March 31st, they could show their energy provider exactly how much they had been using before prices shoot up.

“That way you draw a line in the sand that says to your energy firm, I’ve only used this amount at the cheaper rate,” he told ITV earlier this month, adding: “Don’t start charging me more on the higher rate and estimating I use some of it afterwards.”

The average household could save £47 on their energy bills by submitting a meter reading today.

Some customers on social media complained that they were unable to log in to their accounts, while others said their provider’s website was offline.

Most energy providers are overloaded with customers trying to submit their readings. Clearly, companies were not prepared for so many customers to try and get in touch, leading to their websites crashing.

Greg Jackson, the founder of Octopus Energy, said on Twitter that the company currently had 2,500 calls waiting.

“On a normal busy day, it’d be 150. Yesterday, we increased the number of servers we us by 250% to help with the expected load,” he said.

British Gas told Sky News it was trying to find out when the issue would be fixed, but didn’t provide any other details.

Scottish Power, owned by Spanish energy giant Iberdrola, said it was working to resolve an issue with its website and told customers they could submit meter readings via an automated telephone line instead, Reuters reported.

Sky has contacted SSE, E.ON and EDF for comment.

What should I do if I can’t submit a reading?

Firstly, take a photo of your meter so that you can prove to your energy company, if you need to, what the reading was on March 31st.

Next, many energy firms won’t require you to submit your reading right away (this will vary from company to company, so check with yours).

Octopus Energy, for example, can accept meter readings up to five days after it increases its prices on Saturday.

Greg Jackson also suggested that customers leave their meter readings by email if the website wasn’t working for them.

Most providers will have a number of methods for submitting a reading, so it’s best to try and find the best way to get in touch with yours. Alternatively, find out what the latest date you can submit a reading is, and then wait a few days for things to calm down and try again.

What should I do if I have a smart meter?

Money Saving Expert Martin Lewis says that for those with smart meters, there’s no need to submit a reading. You just need to take a photo of your meter in case of a dispute with your provider. Otherwise, the smart meter will do all the work for you.

Why is the price cap being lifted?

The price cap is intended to shield the most vulnerable in society from paying huge energy bills.

It stops energy companies from making excessive profits, ensuring customers pay no more than a fair price for their energy, says Ofgem, the energy industry watchdog.

The price cap allows energy companies to pass on all reasonable costs to customers, including increases in the cost of buying gas.

But over the past six months there has been a record rise in global gas prices, with wholesale prices quadrupling in the last year.

This has meant that, because of the price cap, some energy companies have been charging customers less for their gas than what they paid for it in the first place.

It is one of the reasons why dozens of energy firms have gone bust.