Chris Rock breaks silence on slap by Will Smith at Oscars: ‘I’m still processing what happened’ 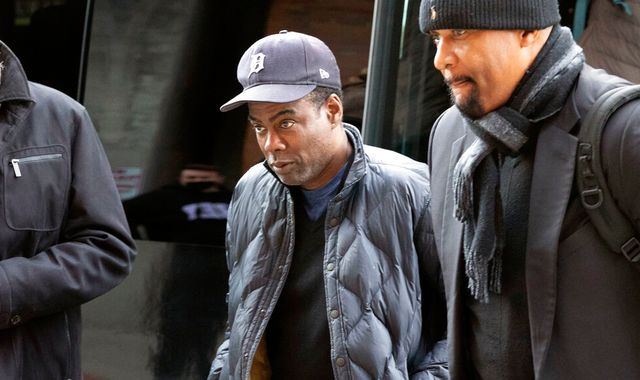 Chris Rock said he is "still processing" being slapped by Will Smith at the Oscars after receiving several standing ovations from a Boston audience upon returning to the stage for the first time since the incident.

"How was your weekend?" the US comedian asked a sold-out crowd at Boston’s Wilbur Theatre on Wednesday night, drawing a wave of laughter.

Despite breaking his silence over the Oscars incident, he made it clear from the onset he wasn’t going to address it at length.

"I’m still processing what happened, so at some point, I’ll talk about that s***," he told the crowd.

"It’ll be serious. It’ll be funny, but right now I’m going to tell some jokes."

Rock, 57, also didn’t refer to Smith nor his wife by name during the show.

"Let me be all misty and s***," he said, with tears in his eyes. "I don’t have a bunch of s*** to say about that, so if you came here for that… I had written a whole show before this weekend."

Appearing to reference the incident again during the first of his two sets, he said: "Other than the weird thing, life is pretty good."

The Boston show came just three days after Smith struck the comedian for making a joke about his wife, Jada Pinkett Smith.

Wearing all-white for his performance, Rock appeared almost embarrassed by the numerous standing ovations he received.

He appeared to get emotional at one point as the applause carried on for minutes – with fans yelling "I love you, Chris!"

Ticket prices for his shows skyrocketed from around $46 (£35) to $400 (£304) after the confrontation at the Oscars, but the comedian has been defiant about not talking about the incident during his gigs.

While not touching on the altercation with Smith, Rock didn’t hold back on skewering celebrities and politicians, among them the Duchess of Sussex, the Kardashians, President Joe Biden, Hillary Clinton and former president Donald Trump.

Members of the audience shouted their support for the comic throughout the performances, with at least one person yelling that Rock should sue Smith.

One fan outside the venue showed off a T-shirt featuring the GI Jane logo and Pinkett Smith’s face, while another had a shirt he made with Smith’s face and a crude joke about the couple’s relationship.

A joke that led to a slap…

At Sunday’s Oscars, Smith walked onto the stage and slapped Rock after he made a joke about his wife, Jada Pinkett Smith. Referring to her shaved head, Rock said: "Jada, can’t wait for GI Jane 2."

While Smith initially laughed at the jibe, his wife appeared unimpressed – she revealed in 2018 she was diagnosed with alopecia and has spoken publicly about the challenges of hair loss.

Smith went on to win an Oscar around 10 minutes after the incident, using his speech to apologise to the Academy for his actions.

However, he only apologised to Rock the following day, writing on Instagram: "I was out of line and I was wrong."

Will Smith refused to leave Oscars after hitting Chris Rock

It was later revealed by the Academy that they had asked Smith to leave Sunday’s Oscars after hitting Rock, but refused.

"Things unfolded in a way we could not have anticipated," the Academy said in a statement.

It comes as many questioned why the former Fresh Prince was allowed to remain seated in the front row after the incident.

"While we would like to clarify that Smith was asked to leave the ceremony and refused, we also recognise we could have handled the situation differently," the Academy said.

The film academy earlier condemned Smith’s actions, and said it was launching a formal review.