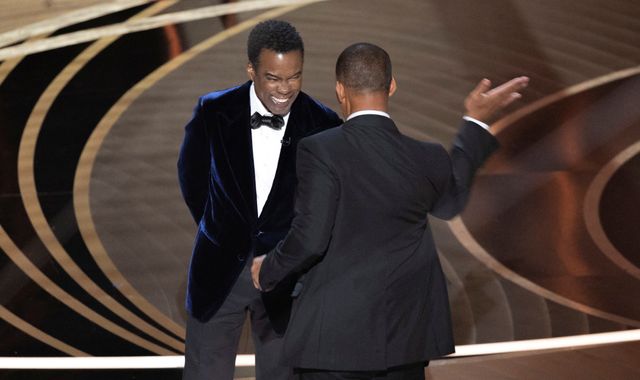 As Will Smith’s slap at the Oscars continues to top headlines about the awards, social media users are wondering – did comedian Chris Rock wear a cheek pad?

The incident, dubbed the ‘ugliest Oscars moment ever’, has caused a stir online, with rumours suggesting that the slap could have been staged.

Will Smith, who went on to win the best actor award for his role in King Richard, smacked host Chris Rock after he made a joke about his wife, Jada Pinkett Smith’s, short haircut.

What are the rumours?

One of the main images circulating online (above), is leading some people to believe that Rock wore a cheek pad on the left side of his face underneath his eye, to soften the blow.

Let’s take a look at professional photos of Rock on stage that night to compare them with this image.

The first two photos taken by news agencies Associated Press and Reuters, show the moments of Rock on stage before and after the actor slapped him.

If you look closely, you can see that his cheeks are not raised like in the image in the tweet.

The next two images were both taken after the slap and once more, you cannot see a raised section on his left cheek or difference in colour, as shown in the tweet.

In these professionals photos, you can also see Rock has light stubble – whereas in the photo in the tweet he appears to have smooth, clean shaven skin.

The final image is the original version of the photo featured in the tweet, taken by Reuters.

The image in the tweet is a digitally-altered version of the photo above, which shows that Rock did not wear a cheek pad at the awards.

What appear to be skin tone and natural face wrinkles in the original photo were likely edited in the version on social media.

Since the dramatic event at the awards, the 53-year-old Fresh Prince of Bel-Air star apologised to Rock, calling his actions "inexcusable".