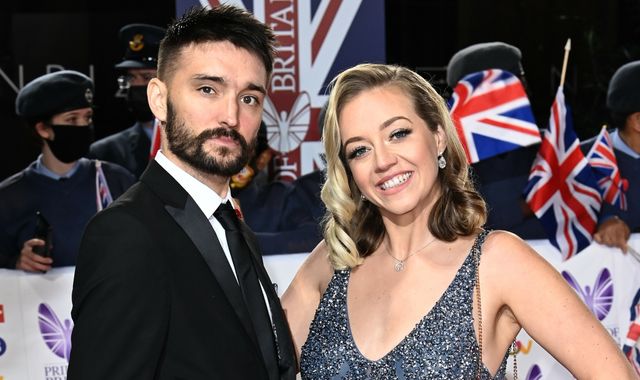 The Wanted’s Tom Parker has died surrounded by his family and bandmates after battling an aggressive brain tumour for 18 months.

“It is with the heaviest of hearts that we confirm Tom passed away peacefully earlier today with all of his family by his side,” wife Kelsey Parker said on Instagram.

“Our hearts are broken, Tom was the centre of our world and we can’t imagine life without his infectious smile and energetic presence.

“We are truly thankful for the outpouring of love and support and ask that we all unite to ensure Tom’s light continues to shine for his beautiful children.

“Thank you to everyone who has supported in his care throughout, he fought until the very end. I’m forever proud of you.”

Read more: ‘True courage’ – the pop star who used his final months to help others

Parker first spoke of his terminal brain tumour diagnosis in October 2020 and had gone through chemotherapy and radiotherapy.

The 33-year-old was one of five members of the British-Irish boy band, known for hits such as party track Glad You Came.

His bandmates also posted a tribute to their “brother” on Instagram.

“Max, Jay, Siva, Nathan and the whole Wanted family are devastated by the tragic and premature loss of our bandmate Tom Parker, who passed away peacefully at lunchtime today surrounded by his family and his band mates,” it said.

“Tom was an amazing husband to Kelsey, and father to Aurelia and Bodhi. He was our brother, words can’t express the loss and sadness we feel. Always and forever in our hearts.”

The group have sold more than 12 million records worldwide, with 10 Top Ten singles in the UK.

The scored two number ones with All Time Low and Glad You Came. The latter was a global hit and reached number three in the US.

The Wanted split in 2014, but reformed last year in support of Parker and released a greatest hits album, as well as playing a cancer charity gig at the Royal Albert Hall.

Speaking to Sky News in September, Parker said he was feeling “pretty good” following treatment for his tumour and was excited about performing again.

“I think a lot of people are quite surprised by it,” said the Bolton-born singer.

“I think with this disease you get quite a natural decline, but if anything it seems to be on the incline. I feel a lot better than I did a couple of months ago.

“When we had the initial conversation [about reuniting], I was like, ‘I’m not sure I will be able to do it’, just for my health.

“But with my health getting better, here I am sitting here today.”

The singer was diagnosed with a grade four glioblastoma – an aggressive cancer that can occur in the brain or spinal cord. It was detected after he had several unexplained seizures.

However, in January 2021 he said there had been a “significant reduction” in the tumour’s size, and in November posted that he had “tears in his eyes” after discovering it was “under control”.

“So young and so sad. RIP .@TomParker from .@thewanted Strength and love to his family,” tweeted Donald.

Sheeran, posting on Instagram, called Parker a “lovely guy” and said he was “so sad to hear of Tom’s passing”.

Payne tweeted: “I’m heartbroken to hear about Tom. He was so full of life and humour, and the memories I have of him with stay with me forever.

“Sending my thoughts out to his family and his brothers in The Wanted.”

Spandau Ballet star Martin Kemp posted: “Tom Parker, rest in peace my love goes out to all your family and all your friends.. your bravery, your fight and your spirit will never be forgotten.”

Fellow boy band Blue said Parker’s fight with cancer “was an inspiration and he changed the lives of everyone he came into contact with”.