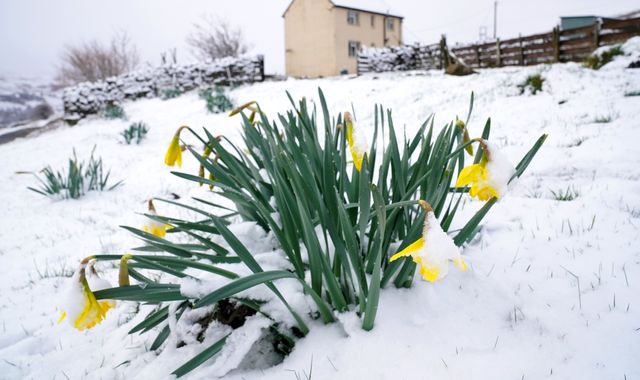 More cold weather is on the way, as the Met Office has issued yellow weather warnings with ice, snow and cold expected across parts of the UK.

Parts of eastern Scotland, north-east England and Yorkshire are expected to experience ice, snow and hail showers from 8pm tonight.

Temperatures are predicted to be half those reached last week, when many areas felt sunshine and highs of 20C.

The Met Office said the snow and hail showers could lead to icy surfaces and possible disruptions to travel.

The warning said there will be “probably some icy patches on some untreated roads, pavements and cycle paths, leading to an increased chance of accidents or injuries”.

Some higher elevation roads may also be affected by the snowfall, with the yellow weather warning running until 10am on Thursday.

The forecast said rain and hill snow will move south across England and Wales during Wednesday with heavy sleet, hail and snow showers in the North.

Thermometers are set to fall below freezing overnight as the cold front pushes down from the North.