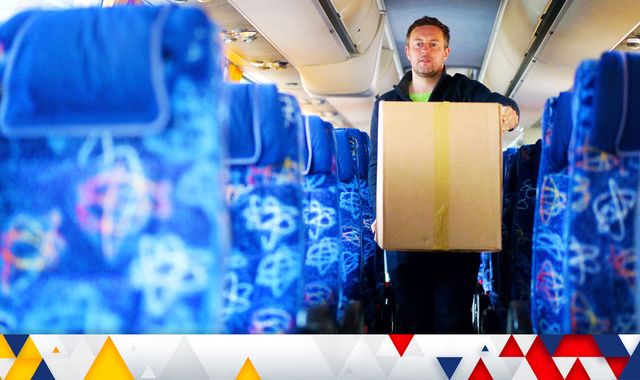 A British volunteer who bought a bus and is taking hundreds of Ukrainian refugees to Poland is appealing for more drivers to help.

Cliff Wilson has spent the past three weeks assisting Ukrainians with the 12-hour journey from Uman, in the centre of Ukraine, to Medyka, a border town in Poland.

Mr Wilson, a language communication coach in the European Parliament who lives in Brussels, has also been using the bus to take aid from Poland to Ukraine – medicine, water, sleeping bags, mattresses, backpacks, nappies and sanitary products – before picking up refugees.

Along with bus driver Niall Gordon, who lives in Sheffield, he has helped 200 refugees to safety – mainly women, children and babies as young as five months old, but also some elderly men, a cat and two rabbits.

Mr Wilson, originally from a village near Poole, Dorset, is now appealing for “willing and able drivers” who hold a UK bus licence to get in touch as he hopes to increase the fleet to five buses and make trips more often.

He said he bought the bus because “being a father myself of a young boy, I wanted to do whatever I could do most effectively to help those people suffering”.

He said the refugees he has been travelling with have been “a real inspiration”, adding that he can “visibly see and feel the fear, the amount of stress that they’re under”.

“They’re saying goodbye to family members and not knowing the next time they’re going to see them,” he said.

“So [there’s] a lot of tears, shock, confusion. The first few hours on board the bus were, you know, basically silent.”

He added: “People could be crying for hours into the journey.

“So pretty sad, but then as we get moving some relief starts forming as well, and we start building up more of a bond and a trust, and we make sure they’re really well looked after – chocolate, for example, they might not have seen for weeks, and that’s always a mood brightener.”

Among Mr Wilson’s passengers so far have been 76 children and 12 babies.

“It’s amazing how quiet they all are,” he said. “There’s almost no crying from any of them, which is probably testament to some of their shock.”

Mr Wilson has fundraised around €8,000 (£6,700) to help with running costs, including diesel prices.

The bus is equipped with a microwave, kettle and charging cables, as well as snacks such as croissants, fruit and chocolate bars.

He plans to continue helping for another month, with a new driver – Martyn Dunn – joining him for his fifth trip from Poland on Thursday.