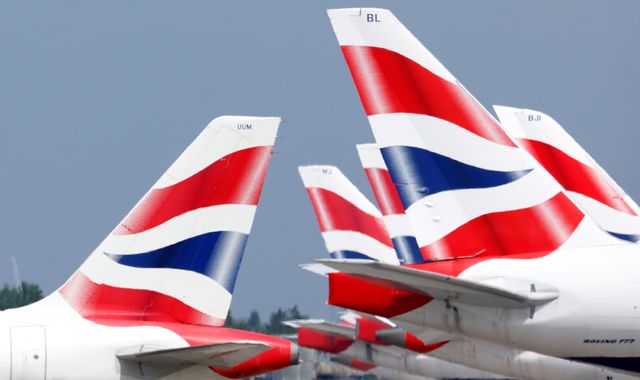 British Airways has revealed its flights have been affected by a “technical issue”, the latest in a series of damaging IT problems for the company.

“We’re investigating and working hard to resolve a technical issue and apologise for the inconvenience,” BA initially said.

It later confirmed: “We experienced a technical issue for a short time this afternoon which affected our operation at Heathrow Terminal 5.

“This has now been resolved and we’re resuming flight operations. We’ve apologised to customers who have been inconvenienced.”

Passengers took to social media to complain of long delays at check-in, while departure boards suggested take-off times had been put back for dozens of flights.

Later services were shown as “on time”.

Sky News has contacted the airline to request a statement on the actions it is taking to prevent IT failures, as its much-publicised problems have damaged the airline’s recovery from the COVID pandemic.

It has cut flights in recent weeks in order to better manage the load on its computer systems.

Just last month, almost 500 flights were either cancelled or delayed globally due to IT failures, exacerbated by staff shortages.

The apology email added: “Work has started to overhaul many of our systems and processes to ensure British Airways is an airline you’re excited to fly with in the future.

“We don’t take our responsibility to you as the British flag-carrier lightly. We know we have a lot of work to do, but we won’t stop until we’ve created the step change that we know will have the airline flying high again, and we promise you’re at the heart of our plans.”

The airline is the largest within the wider International Airlines Group (IAG), which also includes Iberia and Aer Lingus in its stable of carriers.

IAG shares were down by more than 3% on Wednesday as investors digested the latest hit to BA’s reputation.