Will Smith Oscars slap: Could the actor be stripped of his award after hitting Chris Rock – and what does it mean for his career? 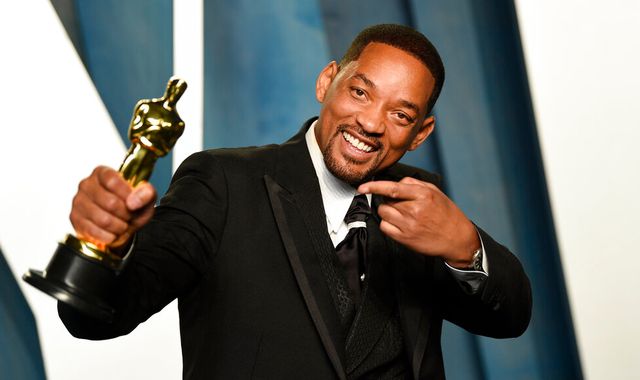 In the hours immediately after the Oscars slapgate, Will Smith posed for photos on the Vanity Fair after-party blue carpet, and was apparently later seen dancing and singing along enthusiastically to one of his own hits, surrounded by glowing camera phones.

So it would appear that initially, the Hollywood A-lister didn’t quite realise what the extent of the fall-out of him hitting comedian Chris Rock on stage might be.

Collecting his best actor statue after the outburst, Smith was cheered by what seemed to be the majority of the audience inside the Oscars venue, despite the almost unbelievable events that had stunned the crowd into silence not long before. He was tearful and apologised on stage – not to Rock, but to the Academy and his fellow nominees – and perhaps thought that was, well, if not the end of it, something near enough.

Twenty years ago, it might well have been. But thanks to social media, millions have watched his outburst, the slap and the furious swearing that followed. Phones are filled with Smith memes. Politicians are weighing in on the debate. After initially saying simply that they don’t condone violence and moving quickly on, the Academy has now launched a formal review of the incident.

Twenty-four hours after the awards, with public debate showing no signs of abating, Smith put out a full statement on social media, apologising to Rock and saying: "I was out of line and I was wrong."

Should Smith keep his Oscar?

There are calls for the star to be stripped of his award and questions have been raised about what this means for his career. Smith, after all, is one of Hollywood’s good guys, the performer who always seems upbeat and happy to engage with fans and journalists, the rapper who "don’t gotta cuss in his raps to sell records", as Eminem famously put it.

As well as his roles in tough action films and Oscar contenders, he is the genie in Disney’s Aladdin and of course, the Fresh Prince Of Bel Air. Works in the pipeline include a sequel to his 2017 fantasy action film Bright, and a reprisal once again of much-loved Miami cop Mike Lowery in Bad Boys 4. He has twice been nominated for best actor at the Academy Awards before his third-time-lucky win.

His role model image is what made the incident all the more shocking. Nothing quite like this has ever happened at the Oscars before, but if it had been a Hollywood hellraiser the situation may have been handled differently at the time, the reaction not nearly the same.

Some Academy members, such as writer-producer Marshall Herskovitz, have called for disciplinary action, writing on Twitter that Smith "disgraced" the film community.

Whoopi Goldberg, a member of the Academy’s board of governors, said on her talk show The View that Smith’s "mistake" does not mean he is not deserving of his Oscar – the first of his long career in the industry.

"We’re not going to take that Oscar from him," she said. "There will be consequences, I’m sure, but I don’t think that that’s what they’ll do…

"[Smith] made a mistake… overreactions, mistakes were made. I think he overreacted… I get it, not everyone acts the way we would like them to under pressure, some people just snap. He snapped."

The Screen Actors Guild called the incident "unacceptable" and said it had been in contact with the Academy.

Even politicians in the UK are talking about it…

On Tuesday, Labour’s deputy leader Angela Rayner told Sky News that Smith had set a bad example for young people and rightly pointed out that it would not be accepted in most other industries. "I get passionate and upset, we all do, but, you know, if I went over the despatch box and lamped Boris Johnson because I didn’t like what he said, because he offended me, then that would be completely unacceptable," she said.

Rock has said he is not pressing charges. The joke that led to all this – about Smith’s wife Jada Pinkett Smith’s shaved head, the result of alopecia, was, I think most would agree, not even funny, regardless of offence. (Knocking someone’s appearance and referencing a 25-year-old film? Rock needs some new reference points). If he was aware of Pinkett’s condition, it was cruel.

No one else knows what Jada Pinkett Smith has been through

Smith’s behaviour was unequivocally wrong. But only a few people will truly know what has been happening at home to lead to his response. People are not wholly good or bad.

Alopecia is a frightening, traumatic illness to deal with, one that women especially feel afraid and sometimes even ashamed to talk about, and Pinkett Smith has no doubt suffered. Because it doesn’t necessarily leave you ill in any other way, it can make sufferers feel they have to grin and bear it, despite the fact hair can be so much a part of a woman’s identity.

Read more:
Celebrities react to Will Smith’s slap
Seven stand-out moments from the Oscars
All the best looks from the red carpet

Pinkett Smith has been brave and open in talking about her experiences, but it has probably taken time and a huge amount of dealing with pain to get to a place where she feels comfortable doing so.

While many have condemned Smith, many others have defended him. It would be a shame to think this one moment that seemed totally out of character comes to define him.

"I hope the Academy invites me back," the star said at the end of his Oscars acceptance speech. In the meantime, the world awaits the results of the review.