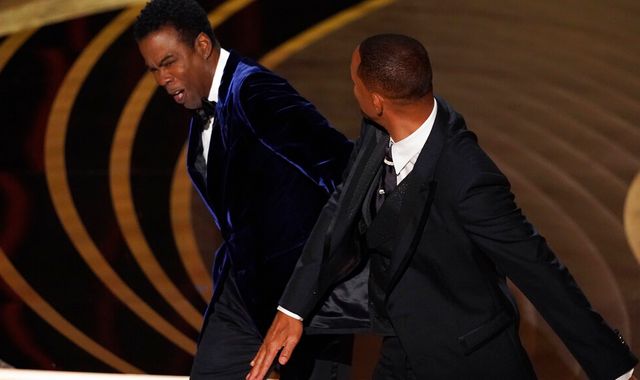 The organisers of the Oscars have said they "condemn" Will Smith’s attack on Chris Rock and have opened a formal review into the incident.

The film academy said it will also "explore further action and consequences in accordance with our Bylaws, Standards of Conduct and California law".

The former Fresh Prince, who won the best actor gong for his role in the biopic King Richard, slapped Rock after he made a joke about his wife, Jada Pinkett Smith, 50.

Smith, 53, initially laughed at the joke but his wife, sitting next to him, rolled her eyes and looked unimpressed. She revealed in 2018 that was diagnosed with alopecia and has spoken publicly about the challenges of hair loss.

Rock went to continue presenting an award but faltered, saying "Uh oh" as he saw Smith get up from his seat and approach him.

Smith then walked on to the stage and slapped Rock around the face before returning to his seat and shouting twice: "Keep my wife’s name out of your f****** mouth."

Moments later, Smith went on to be named as Best Actor.

Accepting his award, he said tearfully: "Ah man. Richard Williams was a fierce defender of his family. In this time in my life, in this moment, I am overwhelmed by what God is calling on me to do and to be in this world."

Read more:
Who won what at this year’s Oscars – full list of winners

The moment has been met with mixed reactions online, with one describing it as the "ugliest Oscar moment ever".

Filmmaker Rob Reiner tweeted his thoughts on the incident and called for Smith to apologise.

"Will Smith owes Chris Rock a huge apology," he wrote. "There is no excuse for what he did. He’s lucky Chris is not filing assault charges.

The Good Place actress Jameela Jamil came to Smith’s defence, writing: "A man big enough to absolutely floor him, slapped him softly enough that Chris barely moved because he made fun of his wife’s alopecia on a world stage."

One Tree Hill actress Sophia Bush condemned the incident, pointing out that both men were wrong. "They both need a breather," she wrote.