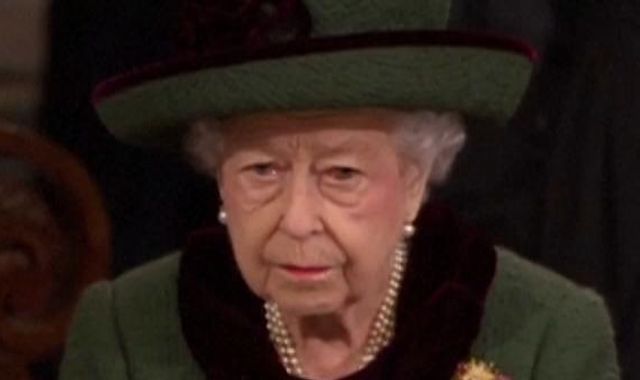 The Queen appeared tearful as she attended Prince Philip’s memorial service in what was her first major public appearance in months.

She travelled to the Service of Thanksgiving in a car with Prince Andrew, in a move that will be read as a clear signal of the monarch’s support for her son.

When they arrived from Windsor Castle, the Duke of York, who settled his sexual assault claim last month, escorted her into Westminster Abbey.

The monarch walked slowly and gingerly to her seat, holding the duke’s elbow with her left hand and a walking stick with her right, and looked emotional as the service progressed.

Concerns about the monarch’s health have led to her absence at some events in recent months – and there had been fears she might be forced to miss today’s service.

The Queen and her son entered the abbey via Poets’ Corner – a shorter route for her comfort – in a small procession.

When they reached the end of the aisle they separated, with Andrew giving a last glance to his mother as she turned right to take her seat next to Prince Charles.

Read more: Prince Andrew’s appearance by his mother’s side shows Royal Family believes he is still one of them

The Duke of York also sat in the front row but across the aisle, next to his brother Prince Edward.

In between the Queen and Andrew were the Prince of Wales, the Duchess of Cornwall, the Princess Royal and Vice Admiral Sir Tim Laurence.

When the service concluded, Andrew accompanied her out of the abbey and they were pictured leaving together in a car.

Most royals in attendance

The event was widely attended by members of the Royal Family, including the Duke and Duchess of Cambridge, two of their children, the Earl and Countess of Wessex and Princesses Beatrice and Eugenie.

Prince Harry and Meghan decided not to attend the service.

It was the first time Prince George and Princess Charlotte went to a major public church service.

Some 1,800 people packed into the abbey – in contrast to Philip’s funeral at St George’s Chapel, Windsor, when only 30 people were allowed due to COVID-19 restrictions and the Queen sat alone due to social distancing rules.

The Queen, 95, was determined to make the service, her first major official engagement outside one of her homes for nearly six months, since she travelled to Cardiff to deliver a speech at the Welsh Senedd on 14 October.

She had been unable to attend the Commonwealth Day service earlier in March for an unspecified reason, having last been seen at an outdoor public event on 5 February, when she met local people in the ballroom at Sandringham House to mark Accession Day.

For the Queen’s comfort, the service was limited to 40 minutes and the monarch sat in one of the Canada chairs with an additional cushion.

The main concern ahead of the event was understood to be whether the Queen would be able to walk to her seat, having previously confessed to being unable to move.

Tributes that had been meant for funeral

Her Majesty was actively involved in preparations for today’s event, which included tributes from the Dean of Windsor and the Right Reverend David Conner, who described the duke as a “remarkable man” who could sometimes forget “just how intimidating he could be”.

Princess Beatrice chuckled as the Dean noted: “He could be somewhat sharp in pricking what he thought to be bubbles of pomposity or sycophancy.”

The monarch, the Duchess of Cornwall and the Princess Royal were all dressed in dark green – a special tribute to Philip, whose livery colour was Edinburgh Green.

Attendees sang a rousing rendition of the hymn Guide Me, O Thou Great Redeemer, also known as Bread Of Heaven – one of Philip’s funeral requests that had gone unfulfilled due to COVID rules.

Gold Duke of Edinburgh Award winners and members of the youth UK Cadet Force associations lined the entrance to the abbey, and prayers were said by the clergy from Windsor, Sandringham and Balmoral – other missing gestures from last year’s memorial.