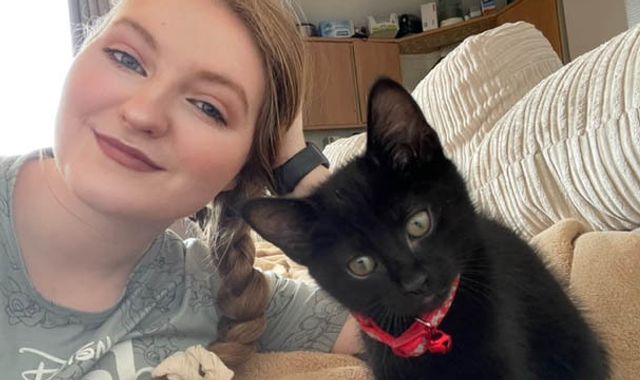 A kitten was rescued by firefighters after he got trapped in a bathroom wall just six hours after arriving in his new home.

Danielle Douglas, 22, had just got the eight-week-old black kitten and was preparing her North Tyneside home for her new arrival when he vanished.

“One minute I was watching him curled up asleep on the floor, the next moment he’d disappeared into thin air,” she said.

Ms Douglas looked around her flat in North Shields, leaving treats and catnip to entice the kitten out.

But only when she started playing sounds of a mother cat purring, did he respond from behind her bathroom tiles

He had managed to crawl through a gap between the ceramic tiling and toilet piping into the hollow wall.

“The resulting meowing was coming from behind the bathroom wall,” Ms Douglas said.

“I was beside myself with worry as I thought that the kitten would be petrified as he was just getting used to his new surroundings.”

She spent an hour trying to coax him out before calling the fire brigade for help.

Firefighters found the kitten behind some plasterboard after removing tiles and the bath panelling, and Ms Douglas has now named him Tubs after his bathroom adventure.

“The firefighters were really gentle with Tubs and made sure that we were both OK before they left,” she said.

“They even did a safe-and-well check on my smoke alarms on their way out.”

Tyne and Wear Fire and Rescue Service’s station manager, Martin Farrow, said: “This rescue of Tubs the kitten is a perfect example of how our crews use their training and judgment to assess the situation and resolve the matter, with this particular incident having a happy ending.

“It was lovely to see photographs of Tubs and Danielle peacefully reunited.”

Share
Facebook
Twitter
Pinterest
WhatsApp
Previous articleWill Smith Oscars slap: Could the actor be stripped of his award after hitting Chris Rock – and what does it mean for his career?
Next articleYear 7 pupil dies at Shoeburyness High School after ‘medical emergency’, Essex Police says