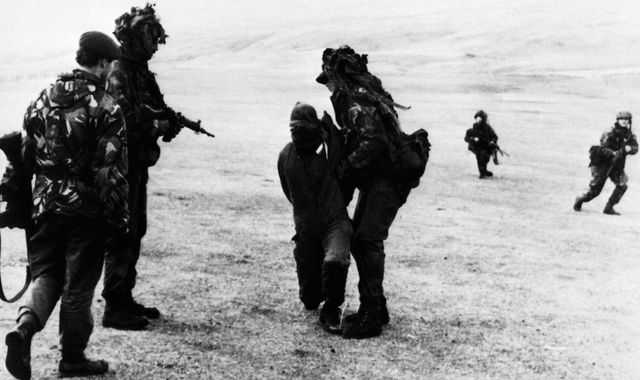 The bitter war between the UK and Argentina over the Falklands risks being “forgotten”, with a quarter of young people having never heard of it, according to a Help for Heroes survey.

The poll, to mark the 40th anniversary of the conflict, found that only 4% of the 2,100 adults polled could answer a series of questions correctly.

Half of those aged 18-34 said they did not know when the war was fought, and one in 10 of that age group believed the UK invaded the islands, leading to the war, while a similar number thought the Falklands are in the English Channel.

The charity said many of the veterans who fought are likely to still be struggling with physical or mental wounds and their sacrifices are in danger of being forgotten.

‘No mental health support at all’

On 25 May 1982 Nick Martin was badly injured when the Atlantic Conveyor was hit by two Argentine Exocet missiles, leaving 12 crew dead.

Although his physical wounds slowly healed, he was subsequently diagnosed with post traumatic stress disorder (PTSD) as a result of his time in the Falklands.

He said: “There was no real support available for me when we returned home. I had a couple of months in Stonehouse Hospital in Plymouth, but nothing more than physiotherapy. There was no mental health support at all. No advice.

“Previously I sabotaged anything that was good, and I wouldn’t allow myself to enjoy anything. I kept thinking: ‘Those lads who never made it back never had a chance to do any of this, so why should I have a nice life?’.

“With Help for Heroes, I had a lightbulb moment that made me realise what I should be doing is living the best possible life I can, because that’s what they would have wanted me to do – but it took nearly 35 years to get sorted.”

‘Recovery can take years or last a lifetime’

Carol Betteridge, head of clinical and medical services at Help for Heroes, said: “Forty years ago, the support for mental and physical wounds was less advanced and harder to access, making it difficult for veterans to get the support they needed.

“While there have been major improvements in government support for veterans since then, we are concerned that veterans are falling through the gaps.

“Just because people were injured 40 years ago, doesn’t mean they don’t still need help, as recovery can take years or last a lifetime.

“We’re currently supporting Falklands veterans with long-term issues, including the lasting effects of trench foot and also PTSD. Every one of them deserves our help and we would urge anyone who is struggling to ask for help.”

A total of 255 British servicemen and three local female civilians were killed during the liberation of the Falklands, with another 775 wounded. Some 649 Argentines died in the conflict, with about 300 of them killed when the cruiser General Belgrano was torpedoed by a British submarine.