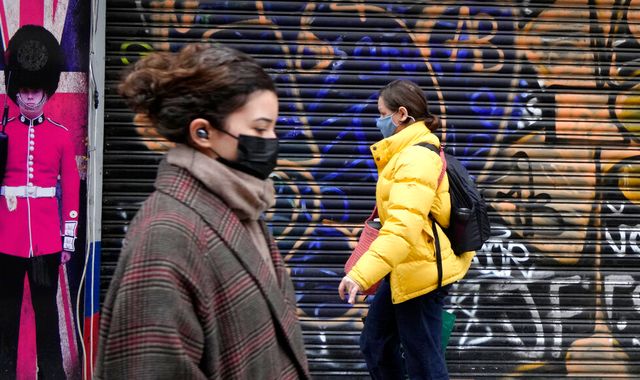 The number of people self-isolating after testing positive for coronavirus has fallen “significantly” since it stopped being a legal requirement – with less than two thirds of those who know they have virus following the government advice, figures show.

The Office for National Statistics (ONS) spoke to 1,369 people over 18 who tested positive for coronavirus up to two days before 24 February 2022, when the legal requirement to self isolate for at least five days was removed.

The respondents were interviewed between 28 February and 8 March 2022 when self-isolation was advised but not legally required.

The survey found 876 respondents (64%) were self-isolating after testing positive for COVID.

Analysis: Why are COVID cases and hospital admissions rising again?

This compares to 80% of the 1,006 people who were surveyed between 7 to 12 February 2022 when self-isolation was legally required.

Despite the fall in the amount of people self-isolating, almost all of the respondents to the latest survey (99%) agreed that it was important to follow self-isolation advice.

Of those who did not fully follow the advice to self-isolate, 94% reported leaving the house for a non-compliant reason.

This was much higher than in the previous period (84%) when self-isolation was a legal requirement.

The majority of respondents to the latest survey (96%) who were in work full time, part time, or unpaid, or receiving sick pay or unpaid leave from work, reported that their employer was aware they were advised to self-isolate – despite the removal of the obligation to inform employers.

Tim Gibbs, head of the public services analysis team at the ONS, said: “Now the legal requirement to self-isolate after testing positive for coronavirus (COVID-19) has been removed in England, our data today reveals more about adherence to these rules.

“Compliance with self-isolation rules was significantly lower than the level reported in February 2022, when self-isolation was a legal requirement. Despite this, we are seeing that almost all respondents agreed that it was important to follow self-isolation advice.”

People who tested positive for coronavirus were legally required to self-isolate under the government’s rules to tackle the coronavirus pandemic in England.

In January, the Department of Health said the default self-isolation period was 10 days but people were able to end it in half that time if they received consecutive negative results on the fifth and sixth day.

The findings come as free COVID-19 tests will no longer be available in England from 1 April, and will only be available to the most vulnerable, as cases continue to rise across most of the UK.

According to the latest ONS figures, around one in 16 people in private households in England – or 3.5 million people – are likely to have had COVID in the week to 19 March.

This is up from one in 20, or 2.7 million people, in the previous week and is the third week in a row that cases are understood to have risen.

Share
Facebook
Twitter
Pinterest
WhatsApp
Previous articleTwo children seriously injured in separate dog attacks in West Midlands
Next articleWill Smith Oscars slap: Could the actor be stripped of his award after hitting Chris Rock – and what does it mean for his career?